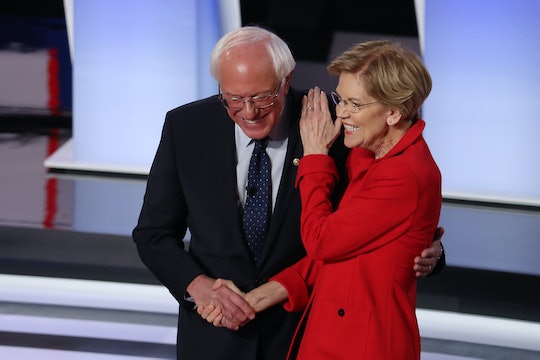 If you watched the second round of Democratic Debates in Detroit, Michigan on Tuesday night, you probably noticed a few things straight away. For example, two of the frontrunners in the Democratic presidential race, Vermont Sen. Bernie Sanders and Massachusetts Sen. Elizabeth Warren, appeared to be close and cordial with each other. Much closer than the other eight candidates on stage that night, in fact, which may have some voters wondering if Bernie Sanders and Elizabeth Warren are friends in real life.

On July 30, progressive candidates Warren and Sanders faced off against eight other Democratic presidential hopefuls, many of whom came across as considerably more moderate than the two senators. In fact, at times the debate seemed to be a bit of an "us vs. them" situation, with both Sanders and Warren coming under attack on issues they both support like Medicare For All, decriminalizing border crossing, and higher taxes for wealthy corporations, according to The Guardian.

While the two could reasonably be called opponents since they are vying for the same position, they presented a remarkably unified front at the debate. So much so that Sanders even apologized for interrupting Warren at one point like a real gentleman, and Twitter loved it.

It turns out that Sanders and Warren have actually been friends for years, according to BuzzFeed News, long before the former Harvard Law professor threw her hat into the political ring in 2012 and defeating Republican incumbent Sen. Scott Brown in Massachusetts that year. The two became friendly after Sanders invited Warren to a town hall discussion on "Economy & the Middle Class Squeeze” at Montpelier High School in Vermont in 2008, according to Politico, as Warren was already an expert on socio-economics and the middle class.

The two have gone on to make names for themselves as ideological political comrades, with Connecticut Sen. Chris Murphy, a Democrat, telling Politico that the two de facto progressive leaders of the Democratic party are a force to be reckoned with when they team up. "When Bernie and Elizabeth have worked together as they have in the past, it’s a powerful coalition," Murphy told the news outlet. "Both of them want to be president, but I’m sure neither one of them wants to give up the ability to work on issues [if] they get back here."

Now that they two senators are working towards their presidential run, political pundits are wondering if they can sustain their friendship, and all signs point to a positive outcome. For instance, when Sanders was interviewed about Warren's rise in the polls recently by PBS, he told the news outlet: "Elizabeth is a friend of mine, she's running a good campaign and I'm proud of what she's doing."

On Tuesday night, the friendship between the two was evident, with both senators using their energy to debate the other eight presidential hopefuls rather than each other.

As the 2020 presidential race goes on, there will be an expectation for Sanders and Warren to go after each other. I hope this isn't the case. Because I think voters feel buoyed for their obvious respect for each other. They both seem like people who want to stay focused on the real issue of affecting positive change in the country.