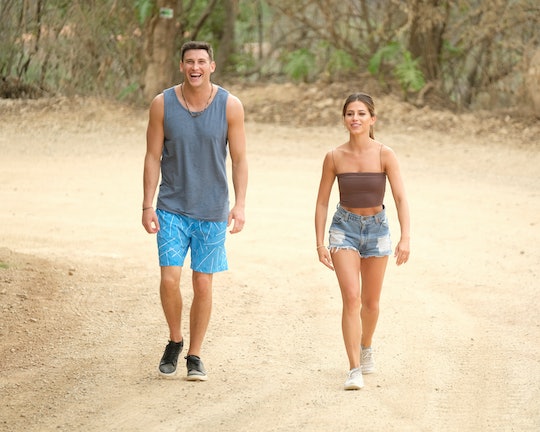 What began as a date card given just so Kristina could put Blake in his place has somehow turned into a full-fledged Bachelor in Paradise relationship. It's basically Carly and Evan 2.0 (except pettier) and fans are dying to know whether Blake and Kristina are still together after Paradise. Them pairing off in the end almost seemed like a gimmick just to extend their tropical getaway, but could their relationship work in the real world? And more importantly: would ABC spring for them to get married at Stagecoach 2020?

Unfortunately, by the end of the Sept. 9 episode, BiP confirmed what fans knew in their hearts to be true: Blake and Kristina were not going to work out after all, despite the treehouse mini-date he planned for her to prove his affection. (Although, can we acknowledge for a moment that the "romantic" mini-dates are mostly just regular season lounging around with a different pillow arrangement?) Sadly, Kristina had some bad news for Blake, who very firmly believed that she was the forest he'd been missing for the trees all along. She admitted that she didn't actually think they'd be a great match, and that too much had transpired between them for her to "get where she needs to get," as they say in Bachelor parlance.

"I just feel like if we were really into [giving] this a shot, we would be coming into Paradise thinking, 'Hey, let's give each other a shot,'" she astutely reasoned. (Keep in mind, Kristina was the third option Blake latched onto after things with Caelynn and Hannah fell apart.) "But the fact that we were very open in pursuing other people just makes me wonder at this point, are we just wanting each other because we're safe or is it because we actually want each other?" she added

In the end, Kristina decided to send herself home because she felt disingenuous continuing to go on dates with Blake when she wasn't really feeling it. But Blake was heartbroken. To her credit, Kristina went on to explain that she'd "moved on" after their dalliance at Stagecoach, and she didn't really think of Blake as a viable romantic option after that. She said came to Paradise, in fact, hoping Blake would find love with someone else, and offering her romantic advice to him because she cared about their friendship.

"I didn't think you would be coming my way," she admitted through tears.

Blake continued to insist that he felt like the universe had led them on a circuitous route to each other "for a reason," which like, my dude! Sometimes you don't end up with your third option because she was your third option! Not because you were always meant to be and didn't see it till the last possible second. After Kristina self-eliminated, Blake went ahead and sent himself home, too, crying as his van drove him away. Ultimately, this was one of those connections that just seemed too forced to work IRL.