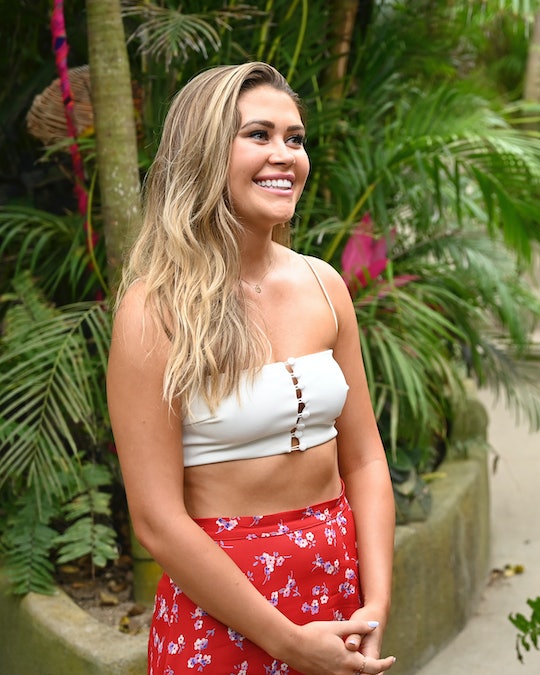 Caelynn & Blake Had Drama Before 'Bachelor In Paradise' Even Premiered

It doesn't usually take long for the drama to begin on Bachelor in Paradise, but this season there is already drama between Blake and Caelynn that started before the season started filming. While Blake might be a hot commodity to some of the other women, Caelynn has her own experience with him and from the sound of it, it wasn't great. Luckily, the timeline of Caelynn and Blake's drama on Bachelor in Paradise explains what happened between them.

Caelynn explained on Bachelor in Paradise that she met Blake outside of the show and they hit it off. According to Life & Style magazine, Caelynn got close to Blake afterward when a group of Bachelor Nation stars attended the Stagecoach music festival. Then, Blake revealed that before that, hooked up with Kristina and essentially ghosted Caelynn after the music festival. She told Wells that despite Blake allegedly hooking up with another woman so soon after he spent the night with her, they had plans to skip Bachelor in Paradise altogether.

Unfortunately, it seems, Blake had other plans that involved going on Bachelor in Paradise after all and trying his hand at find a connection with yet another member of Bachelor Nation. Caelynn was not only surprised to see him in Paradise, but also not too happy to have to share the season with him.

Although it's a case of he said/she said, it certainly looks like some of what Caelynn said is true since Blake avoided her at all costs as soon as she arrived at the Bachelor in Paradise resort. He basically ran for his life and hid until he could see it was safe to come out. Caelynn doesn't seem like someone who will just let this go, however, and I can't blame her. If this is the first time Caelynn and Blake are together since he abruptly broke things off with her, she probably wants to not only get closure, but expose him for what happened and how he made her feel.

Caelynn told Wells that Blake told her he didn't want anyone to know what happened between them, but this is Bachelor Nation. If two former contestants hookup, meet, or even glance at each other across a crowded room, fans will find out about it.

In March, Caelynn admitted to the producers of The Ellen DeGeneres Show that before she went on Colton's season of The Bachelor, she had hoped the season's lead would be either Jason or Blake from Becca's season instead. It makes sense, then, that Caelynn and Blake would eventually meet and hit it off. But it also might have made it harder for Caelynn when things didn't work out and she didn't get much of an explanation from Blake as to why.

Caelynn isn't the only member of Bachelor Nation who needs to have a serious discussion with Blake. When Kristina arrived on the season premiere, she told Chris Harrison she too wanted to talk with not only Blake, but also Caelynn. Hopefully, Caelynn can gain some clarity before she misses out on a chance to have a successful season herself.

Caelynn said on Bachelor in Paradise she would rather have everything out in the open among the other season's stars. Not only does she not want to feel like she wasn't good enough for him, but she also feels like the other women should know him as she knows him. Let's be honest — right now, this is Blake's season and we're all just living in it. But because of Blake and Caelynn's pre-season drama, I have a feeling he is going to have to explain himself sooner rather than later.