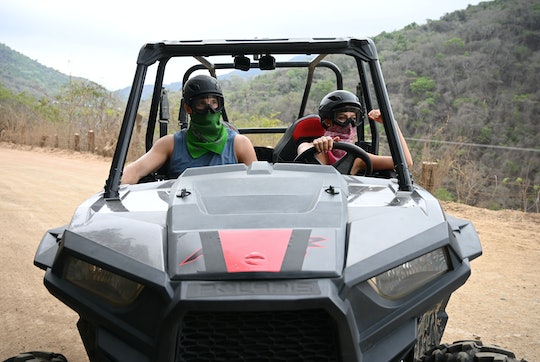 Bachelor in Paradise is gearing up for its summer 2019 return, and while fans are already shipping some faves, the first full-length trailer begs the question: how many proposals are there on BiP Season 6? Unlike in previous seasons, Chris Harrison doesn't tease a specific number of proposals. But some eagle-eyed analysis of the trailer sheds a little light on what goes down.

No faces are shown in the Season 6 trailer's proposal montage, but at least two men can be seen fiddling with a ring box: at least one, but possibly two, in a light blue shirt and one in a dark blue shirt. Meanwhile, based on nail polish, skin tone, and jewelry analysis, three different women are shown having rings slipped on their finger. Also during the montage, Demi Burnett, from Colton's season of The Bachelor, can be heard saying "I smell an engagement and it feels amazing" over footage of her walking to the final rose ceremony. Of course, this might just be some clever editing; Demi could have been speaking in a completely different context, perhaps about a close friend on the verge of getting engaged in Paradise. The "amazing feeling" may have been some encouragement Demi felt watching the process work for somebody else.

It's difficult to ascertain any more information about the identities of the people getting engaged from the trailer, mainly because fans don't yet know who will show up in Paradise over the course of the season. Though the core cast has been announced, the process, by design, weeds out some of those people as the season progresses, introducing surprise replacements. And while the couples who get engaged are usually the people who've spend the most time cultivating a connection, i.e. people who have been in Paradise the longest, it isn't unheard of for a late-in-the-game connection to be a lasting one. (See: Evan and Carly.)

Fans get treated to another BiP wedding this season, with last summer's most unexpected couple tying the knot. Krystal and Chris aka Goose got engaged at the end of last summer, moved in together, became pet co-parents, and now, as Eric Bigger put it in the trailer, have "Goose babies!" to look forward to. (Eric was a fellow cast member last season and scored an invite to the nuptials.)

From the trailer and the Season 6 production stills that have been released so far, it looks like Blake Horstmann from Becca Kufrin's season of The Bachelorette, and Kristina Schulman from Nick Viall's season of The Bachelor, hit it off. But Blake also gets accused of being in a "love decagon," so it would appear that he has a winding road to a finale engagement, if he does indeed pop the question at the end. It's sort of a bummer for Kristina, who had one of the tougher times in Paradise last summer. She and Dean famously hit it off during the production hiatus forced by a sexual misconduct investigation, but then Dean suffered a self-sabotaging meltdown and cut it off. (Incidentally, Dean also returns to this season of BiP with a new mustache in tow, so that should be fun!)

In any case, given how much Blake appears in the trailer, I think he's a safe bet for a possible engagement at the end, even if he does shed a lot of tears to get there. You can see who else manages to find love when Bachelor in Paradise returns to ABC on Monday, Aug. 5.