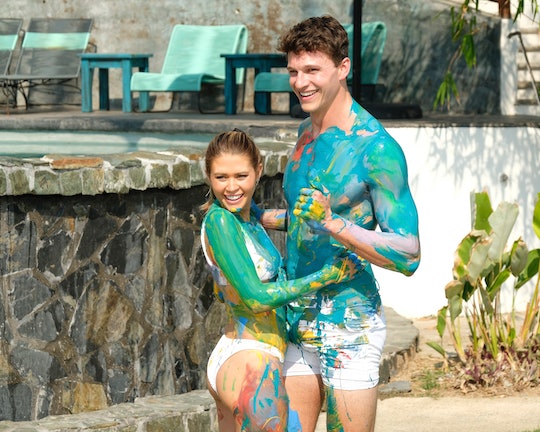 As Bachelor in Paradise hurtles toward its summer finale, fans are desperately searching for clues on who might have walked away engaged and who split up after Mexico. One of the stronger couples this season was Dean Unglert and Caelynn Miller-Keyes — until Dean sent himself home in a blaze of on-brand self-sabotage. But Caelynn quickly found solace in Connor Saeli, the tall, sweet investment analyst from Hannah Brown's season of The Bachelorette. A social media hunt for clues that Caelynn and Connor are still together, however, comes up tragically short. In fact, there's much more evidence that Caelynn and Dean are still together, which makes sense, considering he's about to return to Paradise — sans mustache — to try and win Caelynn back.

A preview for the Sept. 3 episode shows Dean coming back down the stairs to have a heart-to-heart with Caelynn, who looks supremely stressed out by the whole situation. Connor gets pretty salty about his impromptu return, as well, and the whole beach waits with bated breath (along with viewers at home) to find out what Dean and Caelynn are talking about. Whatever it is, it seems pretty likely that he got her rose. Back in July, rumors began to swirl that the pair were dating and vacationing in Spain and Italy together, a source reportedly told E! News. Meanwhile, eagle-eyed Bachelor fans noticed that they were both posting pics from Spain on Instagram at the same time. Caelynn wound up deleting some of her shots, according to Refinery29, but there's actually more evidence the pair has continued hanging out this summer.

In August, Dean went on Ben Higgins' and Ashley Iaconetti's Almost Famous podcast to condemn Blake Horstmann for his Instagram Story meltdown in which he posted text messages between him and Caelynn from Stagecoach to prove that she doggedly pursued him. Said Dean, according to E!:

Although the texts did prove that Stagecoach didn't go exactly the way Caelynn described on the show, Blake still came off looking pretty bad for putting her on blast. And Dean rushing to her public defense seems like a pretty boyfriendly move.

About a week after the podcast episode went live, TMZ spotted Caelynn and Dean visiting a tattoo parlor in Los Angeles together, and made sure to note that Caelynn wasn't wearing a ring. (Dean was still without mustache, for the record.) It's possible that all this hanging out is platonic, but it seems far more likely that they're still dating and simply taking things slow, which makes sense since Dean was planning a nine-month road trip after Paradise.

So maybe Caelynn and Connor weren't meant to be after all. Only time will tell.