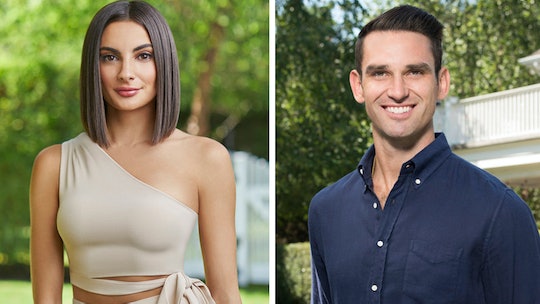 You never know where you might fall in love. It could even be in front of a pantry — at least that's how it all started for Summer House's Carl Radke and newcomer Paige DeSorbo. Viewers of the Bravo reality series watched as the fashion writer and salesman found a cozy spot right in front of the snacks to make out during during the show's third season run. But are Carl and Paige from Summer House still dating? Sparks are flying, but it looks like they faded out real quick.

During an interview with Entertainment Tonight, Paige admitted that Carl knew that he could find her by the snacks. Because nothing says romance like a pantry.

"I think that I was just always in the pantry because that's where we kept waters, that's where all the snacks were," Paige said. "So, I feel like Carl knew to find me there. I just feel comfortable if there's four boxes of dried pasta if I'm making out with someone."

However, it appears that the passionate makeout sessions next to the pantry didn't make it past the summer. Paige revealed that she isn't currently in a relationship with Carl.

Nonetheless, Paige made it clear that she and Carl are still close friends, claiming to Entertainment Tonight that they continue to "talk all the time." So then what led to Paige and Carl's breakup on Summer House? The story will unfold in the upcoming episodes of the Bravo series.

In an interview with Extra, Paige explained that the journey between her and Carl is worth the watch.

"I don't want to give anything away, but I'd like to say that I've helped him realize how to treat a woman," Paige teased. "But you'll see how our relationship plays out. It gets really juicy."

Then when asked if her relationship with Carl was just a summer fling or something more, Paige didn't give too many details away.

"You know, I keep it open with him," Paige said. "So I tell him what I want, I tell him how I want things to play out, and he takes my direction most of the time, but when he doesn't, I definitely call him out on it."

That being said, Paige revealed to Entertainment Tonight that the decline in the relationship started when co-star Kyle Cooke confronts Paige about leading Carl on.

"I definitely hold my own with that, because I feel like I did the exact opposite with Carl," Paige said. "I told him, 'you know, how I felt about him' and I said, 'if you want to continue this, these are the steps you have to take, and this is how it's gonna go down. And if you want to do that, then cool, we'll see what happens,' but, you know, men don't ever listen." Yikes.

While fans might be a little bummed that Paige and Carl don't make it out of Summer House as a couple, the imminent collapse of their romantic relationship certainly sounds like it'll be entertaining to watch.