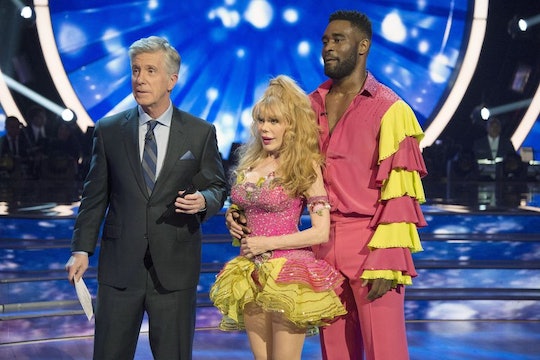 Charo is nothing if not playful and almost constantly joking around regardless of the situation. But after Bruno gave her a score she was less than excited about on Monday night, she started to make a run for the judge's table before her partner Keo assured her that their scores would work out in their favor in the end. But are Charo and Bruno really fighting on Dancing With the Stars?

She's known for being a performer and a comedian too, so I have a feeling it's just all be part of her silly and over the top personality. At least, I truly hope it is. Charo's back-and-forth act with Bruno began on the season premiere of DWTS when she told him that she was watching him after he gave his assessment of their performance. And it was totally adorable, but then she took it up a notch when she told E! News, "I've got a message for Bruno — If he wants to be alive for his next birthday, you better give me bigger numbers. Bigger! I'm watching you. We already have a controversy. Because I am the queen of the cuchi-cuchi, OK? Don't mess with me because, Bruno, I look at you."

But even still, are Charo and Bruno really fighting on DWTS or is it a big act meant to entertain and make everyone a little uncomfortable?

After Bruno gave Charo his second critique, this time for her Week 2 performance on DWTS, she fired back at him that he had an accent she couldn't quite understand. But as fiery as Charo sometimes seems, it looked like it was all in good fun. At least that's the impression I'm getting from all of this.

Charo has been performing as a singer, dancer, and comedian for decades and it seems like it's in her nature to be playful and engaging with pretty much everyone she interacts with, even if she looks like she's overreacting or being a bit too much at times. But the beauty of Charo is that being too much is part of her charm. She might border on taking things too far for some viewers, especially as she goes back and forth with Bruno, but that's just part of her thing. And some of the fans are eating it up.

Monday night, Charo and Keo scored a collective 26, which is up from Week 1's score of 21, so even if Bruno knows exactly how to push her buttons, she's probably going to be fine — unless they're unable to get enough votes from the fans. When it comes to their little feud, though, Charo is too cute to be legitimately threatening.