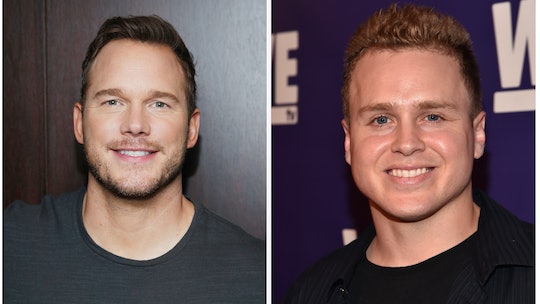 You'd think it would be pretty obvious that lots of people share the same last name, but when an A-list action star and a reality TV legend who happen to share the same family moniker had a meet-cute recently, the internet got a bit mixed up. So are Chris Pratt and Spencer Pratt related? A funny video of their recent "family outing" has social media thoroughly confused about the connection between the two.

It all started when Spencer Pratt, wife Heidi Montag, and their baby attended a MMA tournament in Los Angeles over the weekend, according to Refinery 29. The Pratts then ran into Chris Pratt, a mixed martial arts junkie who was there in support of fighter friend Adel Altamimi, as confirmed by Fox News.

The group then filmed a video, which you can see on Spencer's Instagram account, in which Chris deadpanned that "it's so good when two cousins can just get out and enjoy life," noting he hadn't seen his "nephew," meaning Spencer and Heidi's baby, Gunner, since the baby was much smaller. Spencer added that it was a "family outing."

Clearly, the whole thing was meant to be a joke, as there is absolutely no evidence of the two Pratt clans ever having even noticed each other until this, at least according to Google and Life & Style, which noted that fans have wondered this before, but no relation exists. (It's still possible that they could be very distantly related, but it's unlikely — and they're certainly not close cousins.)

And as CafeMom added, there are lots of stars who aren't related but share a surname such as singer Donald Glover and actor Danny Glover. (Website Popcrush added way more, from non-family members Mario Lopez and Jennifer Lopez to Mariah Carey and Drew Carey and Kristen Stewart and Martha Stewart.)

But this didn't stop the speculating and assumptions on a very long list of replies. "long lost cousins," wrote one user, while another commented, "wtf is Chris Pratt actually related to them? Looool."

"had no idea Chris Pratt and Pratt Daddy we’re cousins!!!," noted another. "They kinda look alike," mused yet another.

At least a few people got that it was all for fun: "Yessss! Same names makes you cousins somewhere somehow," noted one fan. "Omg love how he went along with it but they were definitely star stuck," put together another fan, seeing as how Pratt the actor seemed to pull off the gag better than the giggling Spencer.

And knowing the way Spencer, 35, has portrayed himself as a schemer on small screens past, it wouldn't surprise me if this was a little publicity for Speidi in light of the upcoming Hills Reboot, which Cosmopolitan magazine confirmed will be called The Hills: New Beginnings. The publication noted most of the original cast — including Spencer and Heidi, with plus-one Gunner, 1, — will appear in the show, slated to launch this year.

As for Chris, 39, he's really on a roll: Set to marry Katherine Schwarzenegger, 29, Arnold Schwarzenegger and Maria Shriver's daughter, as People reported, the Lego Movie 2 star will also appear in the next Jurassic World movie, as per IMDB.com. (Chris's ex Anna Faris gave the new duo a shoutout on Instagram after the big news, as Harper's Bazaar recounted. So classy.)

Of course, all of this leads to the next round of speculation: Will Spencer and fam make the guest list for what will surely be one of L.A.'s biggest weddings of the year? I'm sure the Pratts hope so.