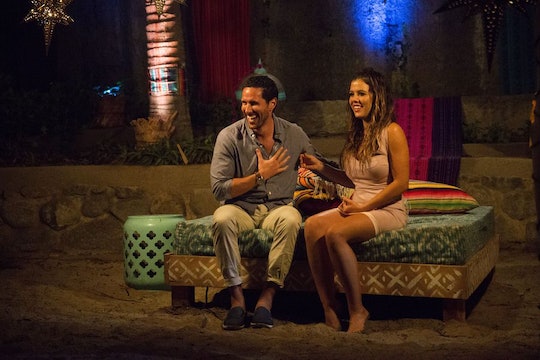 Christen & Jack May Not Be A Match Made In 'Paradise'

The love connection literally no one watching Bachelor in Paradise asked for this season is the one between Nick Viall's token "virgin contestant" Christen and Jack Stone from Rachel Lindsay's season. Christen and Jack seemed to find a spark pretty quickly after her huge flameout with Matt, which resulted in Matt sending himself home rather than get caught in Jasmine's crosshairs. So are Christen and Jack still dating after Bachelor in Paradise? Although they seemed to have a productive conversation about her virginity (a phrase only ever uttered when discussing the Bachelor franchise), there will be another guy popping up soon looking to steal her heart in the form of Jonathan the Tickle Monster. So this thing she has with Jack may end up being short-lived.

Jack Stone broached the subject of virginity as casually as he could with Christen and she gave what is probably a well-rehearsed speech for her at this point. She described her decision to abstain from having sex so far as "a good play" for her, admitting that there's no one she's ever really wanted to have sex with. She was basically making the point that she would have regretted it by now if she had decided to have sex with anyone she's dated, describing most of her boyfriends as "sociopaths."

Of course, that works for Jack Stone's serial killer brand and they passionately made out after this totally normal exchange.

But Tickle Monster may throw a wrench in their plans. Previews show him also passionately making out with Christen while Jack Stone admits that losing her to the likes of Tickle Monster would cause him to seriously question himself. Interestingly, Christen has zero photos of her with Jack in her Instagram feed, not even in group shots with the BiP crew. Jack doesn't seem to have much evidence of Christen anywhere in his feeds either. But Jack did post a photo of himself with Alexis, even though their "bond," as Amanda called it, doesn't seem to be romantic in nature just yet. Also, Christen sent Tickle Monster a birthday tweet:

Both might be platonic gestures toward folks they kinda maybe liked at one point, but the fact that both Christen and Jack have shouted out other contestants they had connections with and not each other makes it seem like they probably didn't come out of Paradise together. We're also at the point in the season where the late-comers are obviously just there for boat-rocking entertainment, while the contestants who have been there the longest try to see if their relationships can withstand the threat of sexy new people. So it doesn't really seem like we were ever supposed to take the idea of Christen and Jack seriously to begin with.