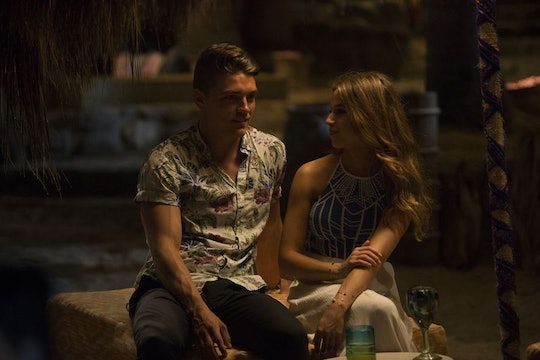 Before Dean Unglert had even been eliminated from Rachel Lindsay's season of The Bachelorette, rumors were already swirling that he had gone on a date with Kristina Schulman from Nick Viall's season of The Bachelor. Once they were both announced as cast members for Bachelor in Paradise Season 4, it became pretty clear exactly how that date came to pass (i.e., not in the most natural setting). So, following their seemingly successful one-on-one date, are Dean and Kristina still together after Bachelor in Paradise? They really hit it off together.

Dean was immediately drawn to Kristina over what he perceived to be shared childhood trauma. (I maintain that eating lipstick to avoid starvation at five years old and having a parent die while you're in high school, disrupting an otherwise idyllic upper middle class upbringing are two very different classes of trauma, but OK, Dean.) He plowed ahead using Kristina's childhood to forge a connection between them and seemed to be pretty successful. They're both around the same age — 25 and 26, so, on the younger end of contestants in the mix after two seasons of older Bachelor/Bachelorettes — which may further bond them. Danielle M., for example, expressed a lot of interest in Dean, but she's closer to Rachel's age, so it might be easier for Dean to connect with someone younger.

More evidence to support Deanstina (Krisdeana?): he posted this extremely adorable photo of them together on Instagram ahead of the premiere. (The caption reads, in part, "Hip, hip, Jorge," which is an objectively amazing dedication to our erstwhile Paradise bartender Jorge.) Plus, back in June, during an episode of The Bachelorette in which some of the guys from Rachel's season critiqued Dean for his young age and relative dating inexperience compared to a 32-year-old woman, Kristina immediately tweeted out an earnest defense of him.

This is actually what first tipped fans off to a possible romance between the two. Needless to say, Bachelor Nation sniffed this one out nearly two months before Bachelor in Paradise premiered and thus, have already been shipping it for weeks. Of course, it's also possible they just remained close after a brief summer fling. If the Bachelor in Paradise premiere showed us anything, it's that Dean is a super hot commodity among the 12 women who started out the season. And since he has the interest of several cast members, his relationship with Kristina probably won't go unchallenged.