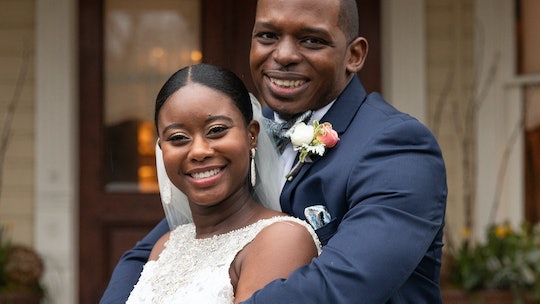 At the start of Season 9, fans of Married at First Sight met Deonna McNeill and Gregory Okotie, and they quickly became fan-favorites. However, as the success rate of reality dating shows aren't exactly something to boast about, and the Lifetime series sets up their couples for a world of drama, fans never know who might stick it out to the end. So are Deonna and Greg divorced after MAFS? The couple might have some growing to do, but everyone is rooting for them to stay together.

As of now, it's too early to tell if Deonna and Greg are still together following Decision Day in MAFS. It is, after all, the entire premise of the show. Giving that information away would be like handing out spoilers for the Game of Thrones finale. Well, except Deonna and Greg are real people living real lives — but I digress.

Typically, fans can catch glimpses of their favorite reality stars through their social media accounts. But, both Deonna and Greg's Instagram profiles are set to private, so no one knows if they've been hanging out since filming the show, and everyone will just have to see what unfolds on the Lifetime series. That said, the couple could have enough compatible values to make their "whirlwind fairytale" work.

Prior to the MAFS premiere, one of the show's "relationship experts," Pastor Cal Roberson, spoke with the New York Post about Deonna and Gregory's relationship. And I think it's safe to say he is on board.

Meanwhile, E! Online caught up with past cast members of MAFS, and most of them predicted Greg and Deonna would last.

"I think Deonna and Greg are the best matched," Season 5's Ashley Petta said. "They both seem very down to earth and level headed. I'm hoping she can be open with her heart and let him in! I loved that he asked if he could kiss her at the altar. I think that was so sweet and very respectful."

Bobby and Danielle Dodd from Season 7 and Kristine Killingsworth from Season 8 also noticed the similar core values between the new Season 9 couple. But Season 8's AJ Vollmoeller and Stephanie Sersen pointed out both individuals have something new they can bring to the marriage.

"Greg seems very respectful and Deonna can bring the excitement that Greg asked for," the couple explained to E! Online. "With Greg's prior engagement, he learned a lot and could incorporate what he learned into this marriage to help Deonna adjust from the single life that she was used to."

Nonetheless, Deonna and Greg's time on MAFS won't be without drama. Deonna was shocked when she found out Greg was previously engaged, and it's taking some time for Greg to understand Deonna's point-of-view after being single for 10 years. However, Greg and Deonna could be in it for the long haul.

In an interview with PopCulture.com, Greg opened up about his relationship with Deonna, and if it's not enough to make you believe in their marriage — or at least in Greg — I don't know what will.

"I had to be patient with Deonna and understand that she was not starting at the same place I was with regards to vulnerability," Greg said. "There will always be different stages of growth in a marriage, and you will need patience and understanding to navigate through them. These traits really stood out to me and the ones that I had to constantly work on as I went through this experience."