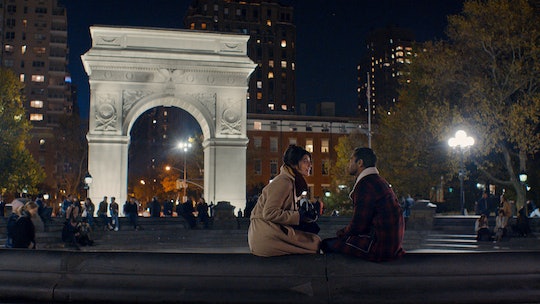 Dev & Francesca Face A Crossroads On 'Master Of None'

Warning: spoilers for Season 2 ahead! Poor Dev really can't seem to get a break this season when it comes to love. First he met Sara, a woman he met by chance in Italy who he formed an instant connection with until he lost her phone number; and then there's Francesca, who's engaged to another man but clearly has feelings for Dev. Talk about complicated. However, the final few moments of Season 2 left things a little uncertain. So are Dev and Francesca together on Master of None? Season 2 left things on a bit of a cliffhanger. But let's back up for a minute here...

After watching Dev and Francesca grow closer and closer as the season progressed, it became obvious that their romantic feelings for each other was eventually going to be addressed. But when it finally was, it didn't look to be in Dev's favor. Yes, Francesca had feelings for him, but choosing him meant changing her whole life, which is an understandably scary (and overwhelming) prospect. So she said goodbye and informed him she still intended to return to Italy with her fiancé, Pino. That is, until she watched a video she and Dev had made weeks ago, which seemed to bring all of her feelings for him back into focus.

That's when the screen cut to black for a second and opened again on a scene with Dev and Francesca in bed together. So did she run over to his place for a spontaneous hookup? Is this a dream fake out situation? Or are they actually going to try and make this thing work? It's difficult to predict where this could go right now.

Part of me also wondered how far ahead we may have jumped in time. Was this to suggest the morning after Francesca was supposed to leave with Pino or is this somewhere down the line, signifying that these two have been together for a while now? I'm tempted to think it's the former, but I can't really say for sure. Either way, this is a huge deal for both Francesca and Dev.

Does that mean they'll stay in New York? Is Dev still going to be traveling all over for his new show even after the whole sexual harassment scandal with Chef Jeff? Would he be interested in moving back to Italy to be with her? What about Mario and when is that kid getting his own spinoff?

These are all questions that Season 3 would hopefully addressed. But considering that the series has yet to get renewed for a third installment, who knows how long fans will have to wait to get some answers.