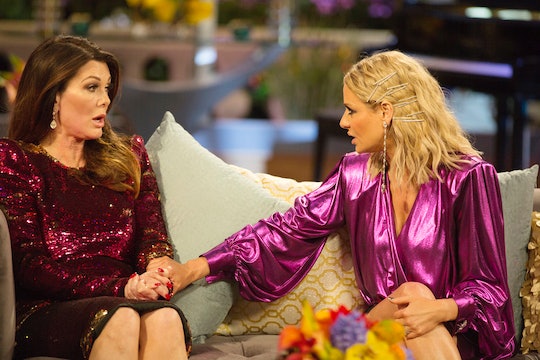 Here's The Story Behind #Puppygate On 'RHOBH'

The Real Housewives franchise has seen some truly bizarre feuds in its day, but this season's upcoming drama between Dorit and Lisa Vanderpump on Real Housewives of Beverly Hills deserves a spot among the GOATs. For one thing, the whole mess between the longtime besties centers around a puppy named Lucy. How a dog could trigger such a blowout may seem baffling to some. But take into account Lisa's longtime work on behalf of animals, including founding her own nonprofit called The Vanderpump Dog Foundation, and the seriousness of the incident becomes a little clearer.

According to People, Dorit adopted a puppy from Vanderpump's rescue shelter last year, before filming on the series began. The puppy in question turned out to be a little aggressive for Dorit's family, which includes her 4-year-old son named Jagger and 2-year-old daughter named Phoenix. Lucy wound up biting both Phoenix and Dorit's husband PK, and since Lucy's aggression didn't appear to be improving, a friend offered to take her in. The family ultimately made the difficult decision to rehome their pet, and this is where the trouble starts.

A Radar report came out in September alleging that Dorit had returned her puppy to a shelter, which is obviously bad optics for everyone involved; Dorit looks like a cruel and inhumane pet owner, and Lisa looks irresponsible for not properly vetting her rescue shelter adoptions. Naturally, there was a lot more to the story, but the damage from the bombshell report had already been done.

Lucy did, in fact, wind up back in a shelter, which the Vanderpump rescue employees discovered because all their dogs are microchipped. (The company has alerts set up to notify them if one of their dogs reenters the shelter system.) But it wasn't Dorit who returned the puppy; it was the friend who offered to take Lucy. Unfortunately, before all these details were made clear, a Vanderpump rescue employee told Kyle Richards and Teddi Mellencamp that Dorit's dog was returned to a shelter, putting her in violation of her pet adoption contract. For her part, Lisa believed Dorit's story and went on the record saying she knew Dorit did nothing wrong.

But in a clip from the Feb. 26 episode of RHOBH, Lisa slides in a subtle criticism over dinner with her castmates, which leaves Dorit in tears. "I don't believe for a second you were guilty of giving the dog to anybody but what you thought was a great home," Lisa starts out. "However, it all went wrong. And you should have given the dog back to me, I suppose."

It wasn't the cruelest dig in the world, but Dorit was obviously feeling sensitive about the situation after being maligned in the press as a terrible pet owner. My sense is that she already felt terrible about what happened, and Lisa's comment about what she could have done differently led Dorit to beat herself up even more. Then, there's the fact that castmate Lisa Rinna believes Vanderpump orchestrated the false report leak as a smear campaign against Dorit. From the trailer, it looks like this feud stretches out across the whole season, and some are even speculating that it's the root of Lisa and Kyle's much-discussed rift later on. You can see how the story shakes out when RHOBH airs Tuesday nights on Bravo.