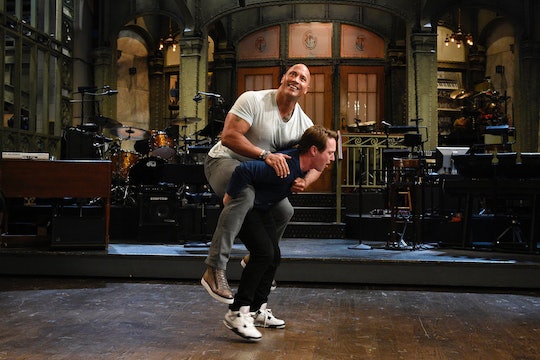 There have been rumors circulating for some time that Dwayne Johnson would run for president in 2020. On this week's Saturday Night Live, Dwayne Johnson and Tom Hanks said they would run for office for real. Well, sort of. During his opening monologue, Johnson addressed the rumors that he would make a good candidate and proclaimed that he was all in. Although Alec Baldwin, a fellow "five timer club member" thought that he'd make a great running mate — alas, The Rock had a better idea. He brought out another longtime friend of SNL — Tom Hanks.

Together, they talked through their strengths. Hanks, for example, would be great at leading the country through a war since he's been in war movies. Johnson could save the world at the very last minute since he's so great in action movies. They're not wrong. As Johnson joked, at first he thought he wouldn't be qualified to even think of running for office, but the bar's been set pretty low these days.

Then things got serious and Johnson and Hanks assured viewers that they were just joking around. But The Rock is pretty good at political speeches. He said, "We need more poise, and less noise" in politics and politicians who really care about the country. Which led them right back to deciding to launch a campaign.

There have been worse ideas, for sure.

Although it was all just fun and games for the opening monologue, the two wouldn't make a terrible pair. As they pointed out, they both have wide fan bases and The Rock could even get the minority vote since, according to him, no one really knows what race he is.

So how do we know The Rock isn't serious about his SNL candidacy announcement? Because he's actually taken the rumors very seriously. He todl Caity Weaver in an interview for G.Q.:

There was a real sense of earnestness [about the rumors], which made me go home and think, 'Let me really rethink my answer and make sure I am giving an answer that is truthful and also respectful.' I didn't want to be flippant—'We'll have three days off for a weekend! No taxes!'

He added that it would be a "real possibility." So maybe he really is thinking about it, but he definitely wouldn't announce it on Saturday Night Live. Or would he?

So yes, it was all just probably part of the opening monologue gag. But I'm not going to lie — a Johnson/Hanks 2020 ticket sure does have a nice ring to it.