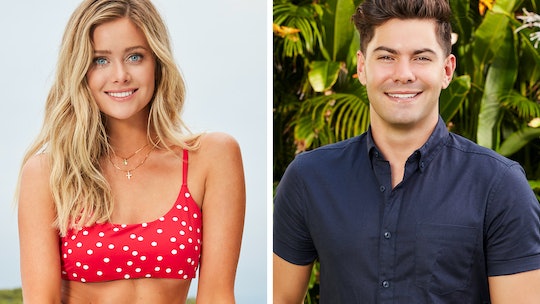 I Smell An Engagement On 'Bachelor In Paradise' — But Will It Be Dylan & Hannah?

Bachelor In Paradise Season 6 might have kicked off with all the drama between Hannah Godwin, Dylan Barbour, and Blake Horstmann, but things seemed to have cooled down since Week 1. After a frustrating amount of back and forth, Hannah finally picked Dylan in the third week, and they've been off in their own world ever since. Now, as the couple progresses on the ABC reality series, fans are wondering if Dylan and Hannah are engaged after Bachelor in Paradise. There's a lot to love about this duo, and everyone wants to see them get their happily ever after.

Not going to lie, the way Dylan looks at Hannah on BiP is enough to show me these two end up together. But personal biases aside, it's too early to tell if Hannah and Dylan get engaged at the end of the series. Neither party has spoken up about their current relationship status — and for good reason. There are still a few weeks until BiP wraps up, which means more drama and unexpected storylines are sure to come. At this point, if Hannah or Dylan announced any news in regards to their relationship, the ending of the show could be spoiled, and some fans might not stick it out until the finale. So for now, everyone will just have to wait and see what happens.

That being said, Dylan couldn't help but gush about Hannah at the "Men Tell All" special of The Bachelorette, which was taped after BiP was filmed.

"Hannah G. is unbelievable. I mean, she's obviously just beautiful," Dylan shared, per Entertainment Tonight. "I think it's unfortunate we didn't get to see her personality [on The Bachelor] and I'm excited to just... I'm excited for everyone to see kinda what the energy is like."

The publication then asked Dylan if he was into Hannah. "I find Hannah very attractive," he replied. "[I] can't stop smiling. But I think that there's a lot of attractive women in the world and the most important thing is just an emotional and mental, obviously physical attraction to it too. So, I'm hoping we find that."

From what I've seen so far in Paradise, Dylan and Hannah have a strong emotional, mental, and physical connection. So how serious do things get for Dylan in Mexico? The reality star teased his future on BiP.

"Am I allowed to say [how serious it gets]?" he laughed. "Hopefully things get really serious in Paradise. Listen, I think it's going to be an unbelievable experience, and I think everyone's gonna get to see something of me and a part of me that not everybody does get to see."

I feel like Dylan is an expert at playing coy or he's just really bad at lying. Either way, he's clearly still smitten by Hannah. And if you don't believe me, just take a look at Dylan's Twitter account, which is filled with clues hinting the two are still on good terms. But does this mean they're engaged? It's possible. However, fans will just have to hold out until Dylan and Hannah's relationship continues to unfold on BiP.