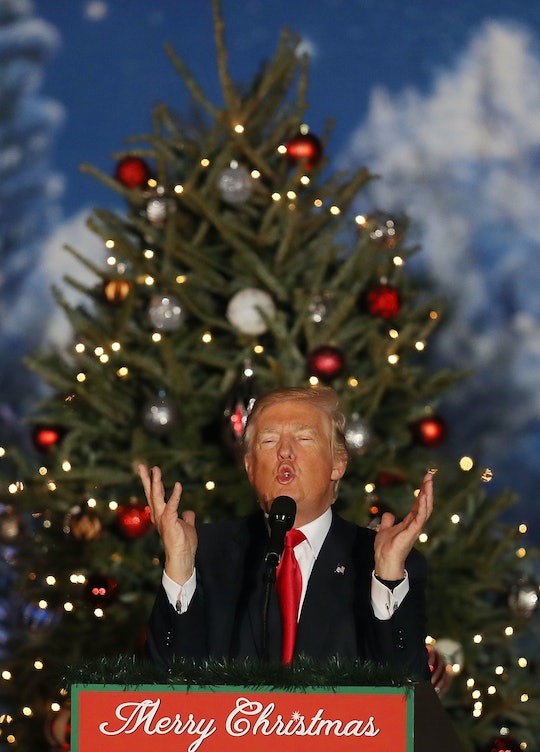 Are Electors Allowed To Vote Against Their Party's Chosen Candidate? It Varies By State

The Electoral College will be meeting on Dec. 19 to formally elect Donald Trump. This will be the last step for President-elect Trump on his way to the Oval Office; after the Electoral College votes, it's the inauguration, Trump in the White House, and four years of God-knows-what. There's a palpable fear in the air, a sense that this might be the last chance to stop the unstoppable Trump train. But is it really?Are electors even allowed to vote against Trump, their party's chosen candidate, even if they aren't sold on him?

The Electoral College is made up of 538 electors, and a presidential candidate needs 270 votes to win the election. While President-elect Trump lost the popular vote by 2.7 million votes, he did gain 306 electoral votes. These votes are considered the rubber-stamped section of voting, the last step that, in recent years, has been seen as ceremonial rather that essential. In theory, the electors cast their vote to coincide with their state, everyone has done their duty and job well done. Theoretically, if 37 electors changed their vote, it would send the decision to Congress. This is highly unlikely; out of Trump's 306 electors who are pledged to him, just two have spoken out against him. Republican elector Chris Suprun from Texas wrote an editorial for The New York Times saying he would not vote for Trump, and another GOP elector from Texas, Art Sisneros, resigned rather than voting for Trump.

Some states do not allow their electors to change the vote of the state and Party they are representing; 30 states plus the District of Columbia are meant to impose fines and other penalties against these so-called "faithless" electors, but those punishments are rarely imposed, according to Fair Vote. The rest of the states do allow these electors to change their votes, but it's not something that happens often. Particularly individual electors acting on their own. There have been times in the past when a group of electors have chosen to change their votes; in 1836, 23 Virginia electors worked together to change their votes (although their reason was pretty heinous; they didn't like the vice president-elect's mixed race wife. Fortunately, the Senate overrode their decision). But, for the most party, electors tend to vote for their Party's chosen candidate out of a sense of historic duty.

And what happens if they don't? Well, there are a few scenarios that could happen. Either the votes could swing to Democratic nominee Hillary Clinton or the electors could "scuttle" the votes, leaving neither candidate with 270 votes. Then the vote would go to the House of Representatives, who would choose a president. These scenarios are highly unlikely, of course. But for those of us dreaming of a Trump-less Christmas... well, they might just help us sleep better at night.