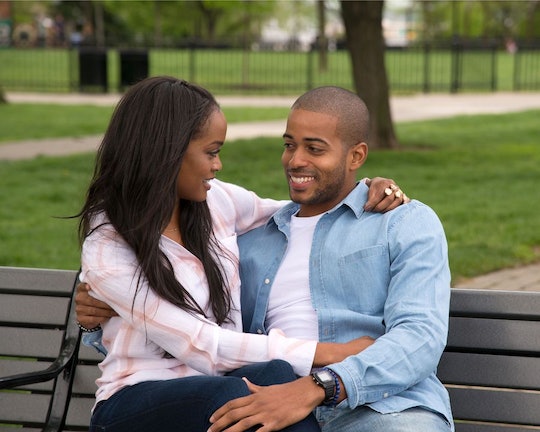 Now that we’re down to the final four Hometown Dates, it’s both easier and more difficult to decide who Rachel should end up with in the end. Easier, because there are just a handful of men rather than a few dozen, but more difficult because each of the remaining four have something great to offer the Bachelorette. Of the men left though, are Eric and Rachel engaged on The Bachelorette?

Their connection might not have been so clear earlier in the season, when Eric admitted to never having been in a very serious relationship. But lately Eric and Rachel have been getting a lot closer on The Bachelorette. Well, that’s probably a given, since he made it this far, but as he said himself, Rachel’s brought out something in him and continues to every time they’re together.

With that in mind, I have no doubt that Eric’s falling in love with Rachel, but as far as either of them making a lifelong commitment to each other, I don’t think it's going to happen for them. It has nothing to do with whether Eric is husband material or not, because I think he definitely is. I also don't think it has anything to do with him not ever bringing a girl home to meet his family either. I think it's just a simple matter of realizing how hard Rachel has clearly fallen for some of the other suitors, namely Bryan and Peter.

In an interview on The Bachelor Insider on YouTube, Eric said that when he was with Rachel on the show, each time they were able to connect they "gained momentum" and "created magic" together. "You can’t force it, it just happens," Eric said ominously. "Like life, like love." Which is pretty poetic, but it doesn’t really tell us anything other than Eric is still optimistic even if he isn’t engaged to Rachel after The Bachelorette.

He also admitted to falling in love, but he was still pretty mum on whether or not that led to an engagement. That could be due to the fact that he doesn't want to give anything away ahead of time. (After all, what fun would that be?) Or it means that there really is nothing to tell and that Rachel ended up choosing one of the other men.

Since Eric did apparently fall in love and make it so far this season, it’s clear that he was there for exactly the right reasons, but Rachel might not see that as enough to start a life together. It’s not the ending that most Eric fans want for him, but considering how beloved he became, I have no doubt that there's love in his future. It just might not be with Rachel.