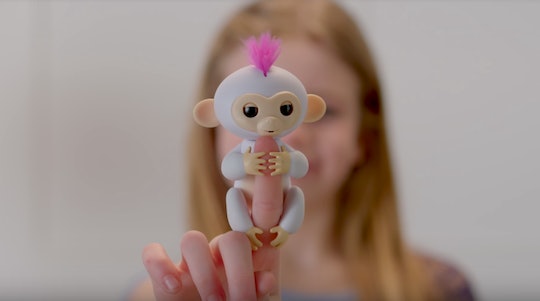 This Is Why Fingerlings Might Not Be Appropriate For Toddlers

Furby, Tickle Me Elmo, and Hatchimals. What do all of these things have in common? They were once the hottest toys to have wrapped under the Christmas tree at some point in the past 20 years. This year, Fingerlings are the newest toys to take the holiday season — and your local Walmart's waiting list — by storm. But before you do your holiday shopping early to get ahead of the curve (the weather is getting colder after all), there are more than likely some things that you'll want to know about the hottest toy in town. If you're wondering if Fingerlings are appropriate for toddlers, look no further.

If your child hasn't bombarded you with images or YouTube unboxing videos of Fingerlings, then you're probably wondering what they are. Unlike Elmo, Fingerlings (also battery-powered) are no bigger than the palm of your hand. These little robotic monkeys are meant to wrap around your finger and be given attention, responding to being touched and played with. They can wrap around any finger-like object, hang from multiple surfaces, and are actually pretty dang cute.

While they might be adorable, parents have every right to be concerned about whether or not they pose a danger for their young child before they get their hands on them.

While the toy's website might be vague about the recommended age range, according to Business Insider, these toys are designed for children ages 5 and older to use. One answer from the manufacturer, WowWee, left in response to a question on Amazon says that the toys are appropriate for ages 4 and up. So it might not be the best idea to buy your toddler a Fingerling for themselves for a number of reasons. (Romper reached out to WowWee for clarification on the recommended age range and is awaiting a response.)

These toys are quite small. According to Amazon, they measure at no more than 4.9 inches tall and weigh just a little over 1.5 ounces. While most observant parents would be able to notice if a Fingerling was in their child's mouth, let's be real — between the ages of 1-3, anything is a choking hazard.

But the age limit could also be in place because your toddler just might not "get" the toy. Watching Fingerling YouTube videos show just how the toys are meant to be played with. They respond to clapping, talking, and different hand movements that might be a little advanced for a toddler. While their cute laughs and look might certainly grab the attention of your child, the concept could go over their heads.

Just because it isn't exclusively recommended for your toddler to play with Fingerlings doesn't mean it won't stop them from playing with it. There are, after all, plenty of positive five-star reviews left on Toys "R" Us' website, where customers claim to have purchased Fingerlings for kids aged younger than 5 years old. And you, as a parent, have the right to decide what kind of toys your toddler plays with. But I'd also heavily take the manufacturer's age range into consideration when buying one.

But it is more than likely that your toddler and every other child you know will be asking for a Fingerling this Christmas. Fingerlings have made the top toy lists at Walmart and Toys "R" Us for this holiday season, according to CNBC. And like Hatchimals in 2016, the may become scarce once the holiday season begins and word really gets around.

My advice? Buy a Fingerling now while they're still in stock at major big box retailers (and while the prices are still low) and save the toy for when your toddler is a little older. Even though Fingerlings might not be the hottest toy in a year from now, they'll still be something fun and age appropriate to play with down the road.