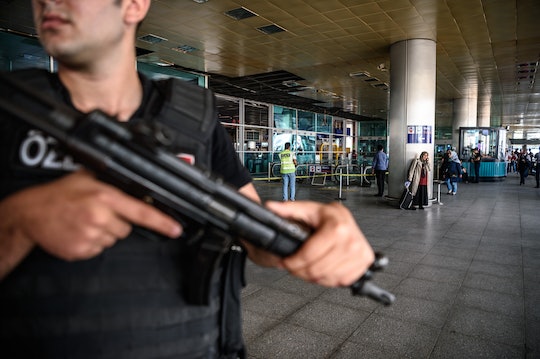 Are Flights To Istanbul Being Diverted? The Ataturk Airport Has Reopened

If one of the goals of terrorism is to force people and governments to cower in fear, Turkey is doing its best not to let ISIS fully complete its mission. On Tuesday evening, three men later linked to the terrorist organization killed 44 people and injured more than 200 in a suicide bombing at Ataturk Airport in Istanbul, one of the country's largest cities. This major travel hub is one of the busiest in Europe, and the attack again challenged the security of major transportation nexuses around the world. Amid the confusion, anguish, and panic the devastation in Europe elicited around the globe, it's natural to wonder whether flights to Istanbul are being diverted.

But Turkey demonstrated its resiliency — and practicality — when its officials reopened Ataturk just five hours after the suicide bombers stormed it and left "blood streaked throughout the arrivals hall," according to NBC News.

ABC News reported that the three attackers appear in security footage from the airport timestamped shortly before 10 p.m. local time Tuesday. After that, they carried out their killing spree, and by 2:20 a.m., thousands of travelers had returned to the airport to catch their flights out of the country, according to USA Today. There, the international hall was still covered with debris.

The idea of entering the scene of a terror attack so soon after it happened is absolutely harrowing, but a couple of factors contributed to the decision to open so soon. First, Ataturk is the eleventh busiest airport in the entire world, so shutting it down completely for an extended period could have had serious logistical consequences.

Also, despite the death toll, the explosions in Istanbul did not cause major physical damage to the airport itself. By contrast, bombings at an airport in Brussels and nearby subway station killed 32 people in March, and the airport shut down for weeks to deal with the damage, according to USA Today.

Although terrorist attacks like this one have happened recently throughout Europe — it's woefully reminiscent of the suicide bombing that was part of a series of coordinated attacks throughout Paris that killed 130 people last year — many are baffled that the terrorists managed to get through the Turkish security. With its double security screenings (imposed on passengers both before and after they enter the terminal), Ataturk boasts much stricter security than many other airports, CNN reported.

The laxer security in the arrivals area is a weakness the attackers exploited, but according to USA Today, security there did help to disrupt the men's plans.

"When the terrorists couldn’t pass the regular security system, when they couldn’t pass the scanners, police and security controls, they returned and took out their weapons out of their suitcases and opened fire at random at the security check," Prime Minister Binali Yildirim said, the newspaper reported.

Despite the security designed to prevent a tragedy like this from happening, this is an incredibly somber week for Turkey and many other countries as they deal with the threat of terrorism and the sad loss of life it causes. The fact that the Ataturk reopened so soon after the attacks and resumed business as usual showcases the strength of all of those fighting terrorism, and suffering the effects of it.