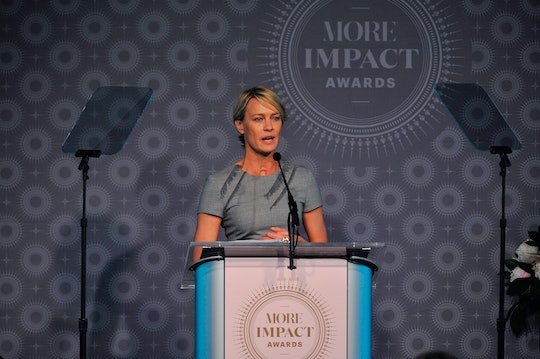 Are Frank And Claire Underwood Still Together In 'House Of Cards' Season 4? Her Threat To Leave Could Be Real

It was the quietest of sentences. Spoken in Claire Underwood's famously soft voice, with this sort of apologetic purpose. "I'm leaving you, Francis", she said. Fade to black. End of season. Heart in my mouth, and maybe a little wine spilled on the carpet, I wondered if she was serious. Then, there was silence for months as we waited to find out if Frank and Claire would still be together in House of Cards Season 4.

Season 3 was not easy on House of Cards' Claire Underwood. The First Lady — she of the $1000 precision hairstyle and laser sharp power suits — has had her fair share of woes. And, while she and Frank Underwood started the season on the same path to greatness, there was a divergence. A shift in power, and as House of Cards fans all know, power is the greatest commodity for the Underwoods. Claire started the season as the First Lady and made it clear from day one she wasn't going to be happy playing second fiddle. After some serious finagling with Frank she became the United Nations Ambassador. Despite her lack of experience and despite being denied approval by those in charge, Frank appeared to support her.

Well, he supported her until Claire makes some fairly serious mistakes when dealing with Russian President Petrov (inspired, of course, by real-life President Putin). Then, the gloves came off, and Frank made it clear that he is the power behind this power couple. In one pivotal scene hinting to the potential demise of the couple, Frank snapped at her, "I should never have made you Ambassador," and she hits back hard with, "I should've never made you President."

Those are pretty hard words to come back from, even in a marriage as (seemingly) unbreakable as the Underwoods. The first 2 seasons of House of Cards saw them fighting off enemies and threats at every turn on their race to the top. Which meant season 3 should have left them free and clear to enjoy the view at the top, yes? Not so much. Because, as Claire eventually learned, there was only ever room for one person at the top.

That person was never going to be Claire. It took author Tom Yates to change the way Claire saw her marriage. Tom was hired by Frank Underwood to write a book highlighting the benefits of his (failed) AmericaWorks program, but an observant and watchful Tom saw the real story. He saw who the real Underwoods were. When Claire read what Tom had to say about them, she had an epiphany. Their marriage wasn't a partnership in her eyes. It was a dictatorship, with room for one at the top. And it was always going to be Frank, leading Claire to make one of the biggest power moves House of Cards has ever seen.

So will she change her mind? Will she go back to Frank in Season 4 to help him win the Presidential election for 2016? Or was it all a strategy to wield more power in their personal House of Cards? Frank knows he needs Claire in his fight for re-election in 2016. Without her, he's weakened, and we know that being weak is one thing Frank Underwood doesn't do. But, Claire is an equally strong counterpart to Frank, and something tells me she won't give in to his demands so easily.

Thankfully, we won't have long to wait for the answer. Season 4 starts streaming on Netflix this Friday, March 4th, should answer all of our pressing questions. Until then, Underwood 2016!