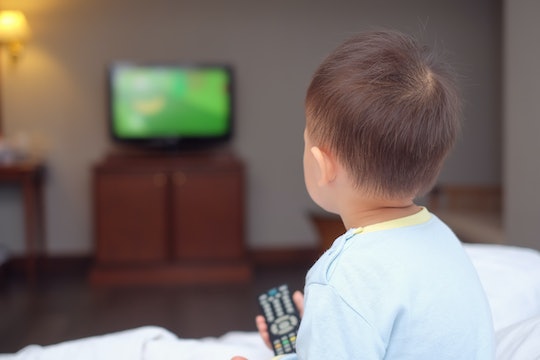 Grandparents Might Be Too Lenient With Their Grandkids' Screen Time, Expert Warns

Whenever I think about being a grandmother about one million years from now, I always picture myself doing so-called grandparent activities with these potential children, like baking and going for walks to the park, to same some examples. But the reality of being a grandparent is probably far different thanks to technology, and some grandparents might struggle when it comes to regulating their grandkids' screen time. An expert talked to Romper about this exact dilemma and explained why some grandparents are too generous with screen time when it comes to their grandchildren.

A new study out of Rutgers University focusing on how much screen time grandparents allow their grandchildren was recently published in the Journal of Children and Media. Researchers looked at families with children between the ages of 2 and 7, who spend at least one night per week with their grandparents. The results of the study were somewhat surprising — grandparents involved in the study allowed their grandchildren to spend approximately half of the time on devices like tablets, mobile phones, and televisions, averaging two hours out of a four hour period together.

According to study co-author Dafna Lemish, professor of journalism and media studies and associate dean for programs at Rutgers University–New Brunswick’s School of Communication and Information, there are several possible reasons why grandparents are allowing so much screen time. Lemish explained in an email to Romper:

Some grandparents involved in the study also pointed out that they are less confident when restricting use of interactive media than other activities, perhaps because of a lack of experience with games and apps. Others noted that their grandkids' parents set aside rules for screen time, which led to more screen time than normal.

The American Academy of Pediatrics (AAP) recommends children between the ages of 2 and 5 limit their screen time to one hour of quality programming per day, a number the grandparents in this study exceeded. But what is a parent to do? As Dafna Lemish told Romper, it's all about communication. She explains:

It is important for parents to share with grandparents their own family values and norms of behavior related to media use. Parents could explain that they see screen time as an important socializer for their children, and thus they would like to use it in ways that maximize their positive potential and minimize their negative impacts. Parents should specify when and how much screen use they approve of, as well as what content their children should be exposed to such as which programs, applications, websites, and games they allow.

Lemish also pointed out that there are alternative activities grandparents can do with their grandchildren as a means of distraction, stating:

While this was not part of the study itself, we know from other research that interacting with children, such as playing, reading, engaging in artwork and outdoor activities, having friends over, are all activities that enrich children’s lives and contribute to their healthy development.

That all being said, a little screen time is perfectly fine in some cases. "Of course, using screens in a moderate amount and with age-appropriate quality content, could be also very valuable for children (and provide grandparents with much needed 'break')," Lemish advises.

The relationship between grandparents and their grandchildren is a pretty beautiful one, and one that should absolutely be cherished. I don't think anyone is blaming grandparents for struggling to limit screen time, as it's in their nature to appease and entertain. Perhaps with a little communication and a little nudge in the other direction, however, it might be easier for them to say no every once in a while.