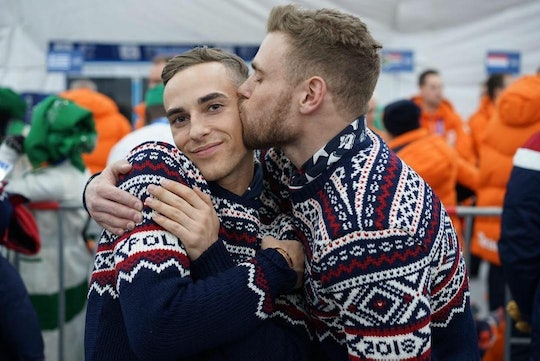 Are Gus Kenworthy & Adam Rippon Friends? The Olympic Stars Are Proud To Be Queer

Gus Kenworthy is competing in this year's Winter Olympics as a skier, and Adam Rippon is competing as a figure skater. The two Olympians only met for the first time at this year's games. However, Kenworthy and Rippon became friends months ago via social media because they have something in common — they are the first openly gay American Olympians to compete in the Winter Olympics. And when they met in PyeongChang this week, Kenworthy tweeted a series of photos with Rippon, celebrating their queerness and their accomplishments — and the internet basically exploded with love and support.

Kenworthy shared photos of himself with pal Rippon on both Instagram and Twitter. "The #OpeningCeremony is a wrap and the 2018 Winter Olympic Gaymes are officially under way!" he wrote on Instagram. (Readers, note the use of gaymes — well done, Gus.) "I feel incredibly honored to be here in Korea competing for the US and I'm so proud to be representing the LGBTQ community alongside this amazing guy! Eat your heart out, Pence. #TeamUSA#TeamUSGay 🇺🇲🏳️‍🌈."

Rippon also shared a photo with Kenworthy. In the caption, he expresses how joyful he is to be able to compete in the Olympics as his authentic self.

"Tonight I walked in the #OpeningCeremony and got to watch my old friend @Yunaaaa light the Olympic flame," Rippon tweeted on Friday. "Representing the USA is one of the greatest honors of my life and being able to do it as my authentic self makes it all so much sweeter 🇺🇸🏳️‍🌈🏆🌎❤️🔥."

In an interview with People before the Olympics kicked off, Kenworthy told the story of how he and Rippon first connected. When Rippon was named to Team USA, Kenworthy reached out to him on social media to extend well wishes. The pair quickly became friends, according to Kenworthy, and were psyched to finally meet in PyeongChang. “We’ve been messaging and exchanging well-wishes and good luck, and we’re excited to hang out and kiki in Korea,” Kenworthy said at the time.

And from an interview room in PyeongChang this week, Kenworthy opened up to Romper via phone about how supported he feels as one of the first two openly gay athletes to compete in the Winter Olympics. "As much as it does put more pressure on me, and there are more people watching, there's also so much more support given to me than there ever was in the past," he told Romper. "I have an amazing community behind me and rooting for me, and I'm excited for that."

And the two men are making history for more reasons that being the first openly queer Team USA athletes in the Winter Olympics. For example, Rippon recently made headlines for stating he would refuse to meet Mike Pence at the Olympics should the opportunity present itself. "You mean Mike Pence, the same Mike Pence that funded gay conversion therapy? I’m not buying it," Rippon said in January, according to USA Today.

Pence actually tweeted a belated response directly to Rippon on Thursday, declaring his alleged support for all of Team USA.

"@Adaripp I want you to know we are FOR YOU. Don’t let fake news distract you," Pence wrote on Twitter. "I am proud of you and ALL OF OUR GREAT athletes and my only hope for you and all of #TeamUSA. is to bring home the gold. Go get ‘em!"

However, people were quick to criticize Pence's hypocrisy.

It's pretty clear that Adam Rippon and Gus Kenworthy are going to crush this year's Olympics with or without Pence's support. Go Team USA!