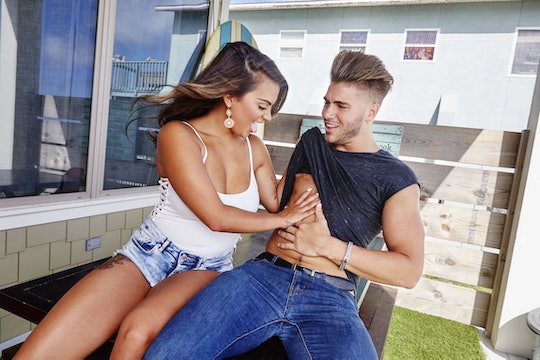 Fans Question If Gus & Nilsa Are Dating After 'Floribama Shore'

Well, well, well. The tables have certainly turned on Floribama Shore. Back in Season 1 it was Gus who only had eyes for Nilsa, but now it’s Nilsa who has the hots for Gus, and he’s not exactly against the idea of being with Nilsa. Now that the two shared a few smooches in the back of a cab, fans can’t help but wonder if Gus and Nilsa are now dating after Floribama Shore.

The Gus and Nilsa love story began pretty soon after the pair, along with the rest of their cast members, first moved into the house in Season 1. Gus was totally interested in Nilsa and even proceeded to ask her out on a date, which unfortunately did not end well. Nilsa quickly decided she wasn’t into Gus at all and set her sights on Jeremiah instead. That of course led a whole different saga. Meanwhile, Gus got over Nilsa and has since moved on, happily hooking up with other girls.

This season Nilsa looked on while Gus ended up making out with two different girls within the span of 48 hours. However, this was more of a turn on than a turn off for Nilsa. “Honestly, I feel like Gus from this summer to last summer is a big change,” she confessed. “Gus is like a lover boy. And he is lettin’ loose and wantin’ to have fun, and it’s surprising.” In sum, Nilsa’s definitely interested — but is Gus?

While in their taxicab, along with Codi and Aimee, Nilsa, who had a good amount of drinks, sat in Gus’ lap, and he wasn’t pushing her off. She then started asking him if he’d be interested in “giving it a try.” It’s a little unclear if “it” just means hooking up or trying to date again. Either way, Nilsa made it very clear what she wants. Gus, on the other hand, didn’t really give her a straight answer. Still, when Nilsa went in for the kiss, Gus didn’t pull away. Instead, he accepted all of Nilsa’s smooches.

However, later on Gus told Jeremiah that it was “very dangerous to go down that road.” Still, he didn’t say he wouldn’t do it. Fans will have to keep watching this season of Floribama Shore to see how Nilsa and Gus’ possible relationship plays out, but for now fans are looking for clues online that indicate Gus and Nilsa are currently together in real time.

As far as viewers know, both parties are, at the very least, single. Nilsa was dumped by freedom fighter Josh back in Season 1 and it doesn’t seem like she’s been with anyone, at least not seriously, since. As for Gus, people began “shipping” him with Teen Mom 2 star Briana DeJesus after they appeared together in a photo on Instagram. However, the photo was taken at MTV’s TRL and they were also joined by Gus’ co-stars and Briana’s sister, so that’s not great evidence. Still, the photo has since been taken down and one has to wonder why.

When it comes to Nilsa and Gus’ social media pages there’s been no hints that the two are in a relationship, however, because the second season is currently airing it’d make sense that if they are dating they’d want to keep that under wraps for now, as to not spoil this season’s plot line. So it seems the only way fans are going to find out if Gus and Nilsa are actually a couple or just having some flirtatious fun is to keep watching the show.