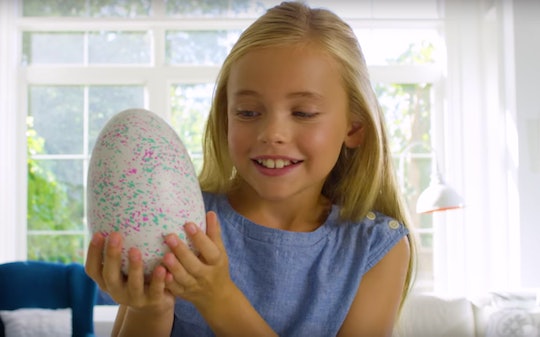 Are Hatchimals Different From Furbies? Yes, In One Very Important Way

Chances are, if you have a little one, you're wishing right about now that Hatchimals had never been invented. This holiday season's most popular toy has flown off the shelves, leaving many parents desperately scrambling in order to avoid their children's crestfallen faces on Christmas morning. So, in the interest of getting creative, are Hatchimals different from Furbies? Could a parent just wrap up a Furby, pop it under a tree, and call it a day? Unfortunately, Furbies lack the thing that makes Hatchimals so popular in the first place — the ability to "hatch" out of an egg. Still, they might be a good bet, especially when the alternative is spending hundreds of dollars on eBay.

Many people have dubbed Hatchimals the new Furbies (or a "Furby plus Tamigotchi combo"), and the two toys do have a lot of similarities. They're both fuzzy creatures with big eyes that don't actually exist in the real world. Both Hatchimals and Furbies talk and move, gaining more skills as you spend more time with them. With the new Furby Connect, the toy links up to an app, so the Furby gets updates and learns new things. Conversely, Hatchimals don't require an app, but they're slightly more limited in the learning department. (The commercial for Furby Connect shows it singing "Cheerleader," which is not something you're going to get with Hatchimals, although to some parents, perhaps that's a good thing.)

Yet the most exciting part of a Hatchimal seems to be the hatching process itself. Kids don't know what variety of Hatchimal is inside their egg, and they have to spend some time with it before it will poke its way out into the world. (In one viral Hatchimals review, a mom shared that the toy quickly got boring after the hatching part, at least for her family.) Furbies don't come out of eggs, although parents can buy Furby Boom Eggs, which are supposedly laid by Furbies and contain surprises like snacks and small creatures. Creative parents could combine a Hatchimal with some Furby Boom Eggs, and see how that goes over.

Some parents have been given a second chance to snag some Hatchimals, with Walmart restocking the toy at 1,700 of its stores, available for $48.88. (Elsewhere, prices have skyrocketed into the $200 range, or higher.) Target will also be restocking the toy starting Dec. 11.

For parents who can't get to Walmart or Target in time and who don't want to shell out the ridiculous resale fees on third-party websites like eBay, a Furby might work to hold children over. More Hatchimals should be available in the new year, according to the company's website.