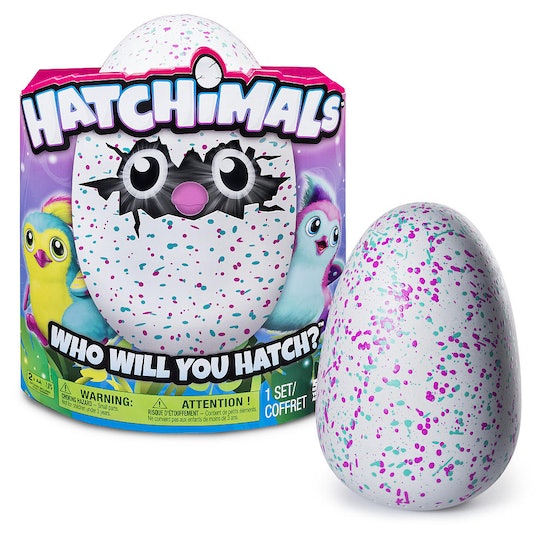 The hottest toy of the holidays had tons of parents going to extremes to get a hold of one and now, it's making them do a double-take. Apparently, some parents have claimed that their children's Hatchimals are mumbling curse words in their sleep. This has led many to wonder what is actually going on with these adorable animatronic birds and ask the question: Are Hatchimals really swearing?

According to some reports, the Hatchimals were mumbling the totally non-kid-friendly phrase "f--- me," though a spokesperson from Spin Master, the company that makes the popular toy, told Romper that it can "assure consumers that Hatchimals do not curse, nor do they use foul language."

"Hatchimals communicate by speaking their own unique language, which is made of up of random sounds, and by making other noises, including shivering when they're cold and snoring while they sleep," Tara Tucker, the VP Global Marketing Communications for Spin Master, told Romper in a statement.

Still, some parents are pretty convinced that they can hear the possibly lewd phrase when the Furby-like toy — which hatches out of its plastic egg after it's been played with, by responding to touch — is sleeping and have posted videos of the toy in its sleep mode.

The first part of the phrase is debatable: Some think the Hatchimal is saying "hug me," others can't make it out and say it's just sighing, and a few are convinced it's saying the f-word. But, whatever it's actually saying or doing, the sound that follows it pretty clearly sounds like the word "me."

Watch for yourself below:

"I'm pretty sure it says 'f--- me,'" Nick Galego, who posted the above video, told CTV Vancouver Island. Galego's wife, Sarah, claimed that she also heard the alleged dirty phrase, but they plan on keeping it because their son loves it and he is too young to understand what his new favorite toy might be saying.

"If he was a little bit older we might be more offended about it," she told the outlet.

Comments on the video, however, seem to disagree with Galego and say that the Hatchimal is saying "hug," "hold," or is just heavily sighing as it sleeps.

It's tough to make out and it's certainly debatable, but along with Galego's video of his son's Hatchimal, more parents have posted videos of their children's toy sleeping, writing that they also believe the adorable bird-like critter possibly has a potty mouth.

While the Hatchimals appear to just be sighing and making pretty audible sleep sounds, the phrase has caused quite the debate as it started trending on YouTube on Thursday evening.

And although these separate accounts of the toy sleeping sound almost identical, according to BuzzFeed News, it's possible for Hatchimals to learn swear words through the "learn to talk" feature. With this feature, the Hatchimal will remember the last thing you've recorded and it will repeat it randomly while in autonomous mode.

The $60 toy sold out almost instantly in most stores over the holiday season, leaving many parents scrambling to find an alternative or forking over hundreds to buy it off sites like eBay and Amazon.

While the moaning sounds may sound like curse words to some and have provided a few laughs for others, fortunately a child's mind is innocent and most likely doesn't hear what adults do. So, hopefully, no harm done, unless you leave something like Goodfellas on in the background for your child's Hatchimal to remember and repeat at random.