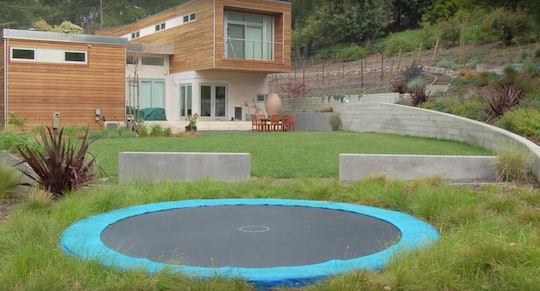 The AAP begs to differ — their current policy is to advise against any and all activity on trampolines, whether in-ground or above-ground. Why? Their data shows that 75 percent of trampoline injuries occur when multiple people are jumping on the mat together, and the injuries from falling are much rarer. The smallest and youngest participants are usually at greater risk for significant injury when jumping with a group, specifically children 5 years of age or younger, who sustained 48 percent of the injuries the AAP documented.

However, the AAOS actually does recommend that the jumping surface of a trampoline be placed at ground level to reduce the number and severity of injuries.

While their data backs up the AAP — that nets and other safety measures don’t prevent most trampoline injuries, since three-fourths of injuries involve two or more children on the trampoline at the same time — they say that eliminating the height of the trampoline from the equation can help make fall injuries less severe.

Whether parents choose an above-ground or in-ground trampoline for their child, the AAOS recommends the following to keep them safe:

Ultimately, purchasing an in-ground or above-ground trampoline can be dangerous for children if they’ll be jumping unsupervised or in large groups. But, it sounds like bringing your trampoline down to ground level can’t hurt.