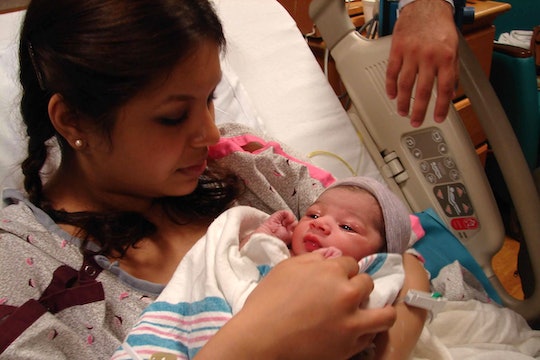 Inductions Aren't All "Bad," But Here's What Experts Want You To Know About Them

When I was pregnant with my first daughter, it seemed like she just didn’t want to come out. I tried everything I could to go into labor naturally, from nipple stimulation to walking for miles a day — nothing worked. Finally, my doctor told me that he would have to induce my labor, and as foreign as that concept was to me, it turned out to be just fine. If you’ve been told you might need to be induced, but have heard mixed opinions about it, you might wonder, are inductions really that bad?

Personally for me, being induced wasn’t bad at all. I was a week past my due date, so my doctor knew it was time to get things going. It turned out to be the right call, because my daughter had inhaled meconium (her own poop) in utero, and waiting any longer could have been extremely risky for her. So in my case, an induction wasn't bad, it was just necessary.

In an interview with Romper, Dr. Kenneth James, OB-GYN at Saddleback Memorial Medical Center in Laguna Hills, California, says that inductions should really only be done when there is a medical need. He says that the standards of care recommend inducing between 41 and 42 weeks of gestation for a low risk, uneventful pregnancy, and the risks surrounding being induced are increased when performed earlier than recommended.

James explains that when inductions are given without any true medical reason or need, they could increase the risk of complications. “There are many potential side effects to the mother and baby of receiving medication,” says James, “whether it be pre-induction cervical ripening agents, Pitocin, intravenous narcotics, or an epidural.” He adds that there is also a failure rate to induction, which can lead to a C-section, so a true obstetric reason would lower the emotional and medical risks for an induction of labor.

Dr. Adrienne Zertuche, OB-GYN at Taylor, Suarez, Cook, Carroll, and Adams (Division of Atlanta Women's Healthcare Specialists), agrees that in general, inductions should only be done for medical reasons, or if you have gone past your due date by one to two weeks. She says that typically inductions are done in a hospital setting where your baby, contractions, and cervical change can be closely monitored. But if you have had a low-risk and straightforward pregnancy, Zertuche says that your obstetrician may even be open to you trying to start the process at home once you reach 39 weeks with natural methods.

So what exactly does an induction entail? Well, remember that every woman and every pregnancy is different, so how you are induced may depend on your specific situation. But in general, according to the American Pregnancy Association (APA), your labor will be induced by a medicine, like Oxytocin or Prostaglandin, which will trigger your hormones to stimulate uterine contractions. Once you are in labor, if your water doesn’t break on its own, the APA explained that your doctor may need to rupture the membrane artificially by brushing your cervix with a sterile hook. I have to admit, the most uncomfortable part of getting induced was having the doctors try to break my water. It took a little prodding and poking, but eventually it was the water breaking that intensified my contractions to go into labor.

I don’t know if inductions are good or bad, but I know that in cases like mine, they are necessary. Getting induced is a pretty anticlimactic way to go into labor though, and you may need to throw all your birthing plans and preparations out the window. But at the end of the day, if your healthcare team suggests that you be induced, you should definitely take their reasons into consideration.