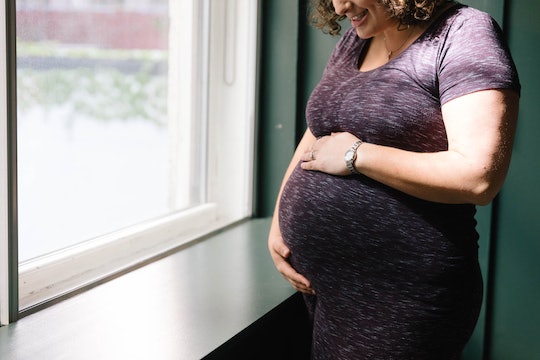 When I delivered my first daughter, instead of getting to hold her right away, I had to wait for nurses to suck something out of her system — they told me she had meconium in her airways that needed to be removed. This being my first baby and delivery, I had no clue as to what meconium was, so I was kind of confused. After some intense questioning, the nurses explained that my daughter had inhaled some of her own poop in utero, which made me think, do babies actually poop inside you during pregnancy?

In an interview with Romper, Dr. Mary O’Toole, an OB-GYN with MemorialCare Saddleback Medical Center in Laguna Hills, California, says that babies can indeed “poop” or have a bowel movement in utero, which is commonly known as meconium, and it is hard to know exactly when it occurs or why. She says that doctors can determine whether or not there is meconium present after the rupture of the membranes, but it can sometimes be seen on an ultrasound — meconium may have a characteristic appearance, different from the usual clear amniotic fluid.

At around 35 weeks, explained Parents, your baby’s digestive system begins to prepare for separation from the womb and umbilical cord, so the leftover nutrients from the amniotic fluid start to build your baby’s first stool in their large intestine. Although most babies don’t punch out this poop until after birth, the article noted, there are some that have a bowel movement before or during delivery.

According to G. Thomas Ruiz, M.D., OB-GYN, of Orange Coast Medical Center in Fountain Valley, California, typically babies may poop in the uterus in the third trimester and it is a sign of utero-placental insufficiency. He tells Romper that the baby will release the meconium when it is under stress, and depending on the degree of stress, the meconium can be thin with no clinical significance or very thick, which if breathed in by the baby can cause lung damage.

Either before or during delivery, my daughter inhaled some small amounts of meconium which was attributed to her being over a week overdue. This is known as Meconium Aspiration Syndrome (MAS), explained Kids Health, and it is seen mostly in babies that are postmature (past due date), that go through long and stressful deliveries, have umbilical cord complications, or have poor growth in utero. While it can lead to complications in rare cases, the website noted, most cases of MAS are not serious.

Sometimes babies poop due to stress of the delivery. Dr. Yen H. Tran, DO, OB-GYN, from Orange Coast Memorial Medical Center in Fountain Valley, California says that when a baby passes meconium in utero, it could be a sign of distress from the lack of blood flow to the brain. She explains to Romper that “these pregnancies need to be closely monitored and might be considered for delivery if they are already full term, or if the amniotic fluid is low, or if the tracing is not favorable.”

Believe it or not, babies actually pee inside you, too. According to Begin Before Birth, starting at week 10 of their development, babies begin swallowing amniotic fluid which can make them pee inside the womb. At around 15 weeks, the article further noted, babies will begin drinking their own urine (perfectly sterile and safe for them), which will begin exposing them to different tastes. Sounds really weird, but there are studies that show that certain flavors can pass from the mother to the amniotic fluid, so what you eat during pregnancy may shape your baby’s food preferences later in life.

So, babies do actually poop and pee inside you, which is a pretty weird concept to grasp, but remember that it’s just a response from their maturing digestive system. Hey, my daughter pooped inside me, and I lived to tell the tale.