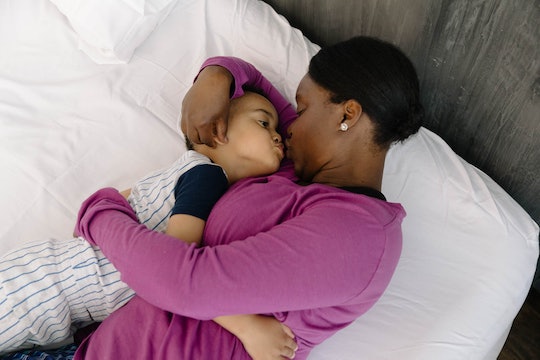 What Real Parents Hate About Stock Photos Of Parenting

Motherhood can be a messy, joyful, and, at times, not so awesome experience. Try to find a stock photo that truly captures that chaos, however, and you'll come up short. That, or you'll find images of a mom pulling her own hair as literal smoke comes out of her ears — a sight that otherwise only exists in comic strips. No wonder parents don't think they are accurately portrayed in the media in general and stock photography especially.

That became even more clear when we spoke to the real millennial parents we recruited to appear in Romper's first original stock photo shoot, shot by in-house photographer Ashley Batz. After almost two years of trying to find diverse imagery for our posts amid a plethora of stereotypical stock photos of pregnancy and parenting — a woman making a heart with her hands (?) over her stretch mark-free baby bump, a woman breastfeeding her child in a field of flowers, a woman smiling as her baby cries in the middle of the night... you get the picture — we decided it was time for a change. We put out a call for real millennial families and pregnant women to be featured in our first original stock photo shoot and, luckily, many answered the call. Why? For the majority of participants, it was about helping publications paint an accurate picture of pregnancy and parenthood.

It becomes more than just an issue of body image. It becomes an issue of trying to get realistic and responsible information about your health.

"It’s very fake and artificial," Olivia Szucs, a mother of two, tells Romper in between takes at the shoot. "The media is selling a vision that’s not really reflective of what really happens to most women." Szucs' husband, Gene, agrees with his wife's sentiments, adding that he often feels like the images are "created by people who don’t understand parenthood is like."

Unfortunately, the misrepresentation starts before the baby is even born. When reading up on pregnancy, Melissa Petro, who was in her second trimester at the time of shoot, thought the images she saw were contradictory to her own experience. It was a shock for a woman who, given that she is white and small-framed, is used to seeing people like her in advertisements and stock photography.

"In most ways, I fit that 'normal' representation, but even I don’t fit the images I see,” Petro says. "The second I got pregnant I gained 10 pounds, my face got round, and I developed cellulite — but I don’t see that [in articles or ads]." Not only can these inaccurate portrayals of pregnancy and parenting cause women to hold themselves to unrealistic beauty standards, but in Petro's case, they made her question if she was gaining too much weight and putting herself and her baby at risk.

"It becomes more than just an issue of body image," she says. "It becomes an issue of trying to get realistic and responsible information about your health."

But the misrepresentation isn't limited to the images that accompany articles; it also makes its way into advertisements that are supposed to be selling products specifically for moms. Swathi Moylan, a mother of one, realized that when she was shopping for items a few weeks after her daughter was born.

"I went to buy a nursing bra, and the woman modeling it had a six-pack," she tells Romper. Her husband, Michael, also remembers being taken aback by what advertisers think a new mom looks like. The couple's daughter was being photographed for an ad campaign, and when her model mom was brought on set, they were shocked.

It’s important for us to be represented in a generally cis-white straight parenting sphere.

"The woman was rail thin, but supposed to represent a new mom," Michael, Moylan's husband, says. "It didn’t look authentic."

The Moylans and Szucses aren't alone in their thoughts. According to a 2016 global study from Saatchi & Saatchi, a U.S.-based ad agency, 51 percent of mothers believe advertisers don't understand motherhood and have an "outdated" view on the role. When you consider there are about 85 million moms on the United States, according to Pew Research Center, that's a large number of people to alienate.

It's not just body size and shape that get misrepresented in mainstream depictions of motherhood. There is also almost not diversity of race, ethnicity, gender, or sexual orientation. (When Honey Maid's "This Is Wholesome" ad featured gay parents, it was big news — in 2014.) Many mothers of color have spoken out about not seeing themselves in parenting magazines, books, and other forms of media. In an interview with Kids In The House, author and founder of My Brown Baby, Denene Millner, said:

You can pick up a parenting magazine or a parenting book and read 250 to 300 pages worth of information and pictures and not see a woman of color or a child of color. As an African-American mother, that makes me feel invisible. And no one wants to feel invisible.

Although a 2012 New York Times article reported that LGBTQ characters with kids are largely accepted by audiences, they are still underrepresented. With politicians threatening to take away the rights of these families (on May 9, Texas House lawmakers passed HB 3859, a bill that would allow child welfare organizations to discriminate against LGBTQ prospective parents), accurate, real-life representation is more important than ever.

"It’s important for us to be represented in a generally cis-white straight parenting sphere," Charlie Arrowood, a nonbinary parent of two, says.

So how can the media make marginalized communities and mothers feel more represented? It's simple — represent them. Whether that means hiring writers from diverse backgrounds, creating content about the less-than-picture-perfect moments, using real families in photo shoots, or a combination of the three, it's important to represent mothers accurately, especially in a space that's meant for them.

"It has to start somewhere," Szucs says. "When you see an image of a woman who looks just like you, and she seems to be feeling the same way you’re feeling, it gives you hope."

And when you're struggling through a 2 a.m. feeding or a 2-year-old's sleep regression, you need all the hope and support you can get.

These photos are just the beginning. Live in the NYC area? Interested in helping us better represent real millennial families by appearing in future stock photos? Please email a picture of your family, plus your age and your kids' ages, to stockphotos@romper.com.

To find out where to buy the baby gear pictured in the shoot, click here.