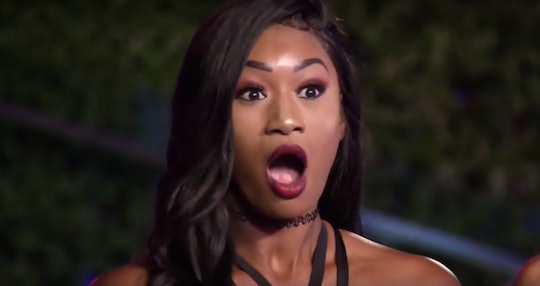 At the start of the Season 2, 11 singles began their journey on Ex on the Beach with every intention of finding someone they could fall for. Some of them did find new partners while others rekindled romances with their exes and a few decided that staying single was a better alternative to both of those options. After some hiccups, Janelle and Darian decided to give their once serious relationship another chance, but are Janelle and Darian still together after Ex on the Beach? She might have went on the show with the idea of falling for someone else in mind, but when Darian showed up, all bets were off.

Unfortunately for her, she wasn't the only single in the beach house who had immediate eyes for him. Instead of rekindling his romance with Janelle right off the bat, he got close to both Diandra and Nurys, creating a sort of love square that Janelle wanted no part of. So much so that she was sent home for fighting with the women and she didn't get to have that final crush ceremony with Darian. Despite all of that, however, the couple revealed on the Ex on the Beach reunion that at the time of its taping, they were together. So maybe in the end, it was all worth it for them.

Part 2 of the Ex on the Beach Season 2 reunion airs tonight, so there hasn't been a final word on Darian and Janelle’s relationship, but when they appeared on the first part of the special, they admitted that they were still together. Both of their Instagram accounts are private right now, however, so it’s hard to say for sure if they are still together in real time. But Darian did tweet a link back to a recent Instagram post that doesn't say they are together in so many words, though it makes it seem like they are at least still very close after Ex on the Beach.

"My biggest regret when comes to TV, was never showcasing the unbelievable amount of love we had throughout the 3 years we dated!" Darian wrote on Instagram. "Unfortunately I made a lot of mistakes and tried to lie & cover up my mistakes not only on #exonthebeach but in the real world! Ultimately that changed everything! But one thing I do know is that I’ll always root for @badgirljanelle to win because she does deserve the [world] plus tax. So y’all need to come at me not @badgirljanelle because she chose to follow her [heart]."

Right now, Darian and Janelle’s relationship could honestly go either way. They have years of history and even lived together before Ex on the Beach came along, and you can't erase that — not even with a few kisses with other women on the show. On the other hand, that can be a lot for anyone to handle, even if Janelle and Darian were together at the time of filming the reunion. The news that Darian had kissed Nurys in the house might have been too much for them to move past and right now, they could just be friends.

Darian’s Instagram post is definitely telling, but neither have come out to say that they are broken up again or still together after filming the Ex on the Beach reunion. Given the turnaround for relationships on Ex on the Beach, the romantic in me would love to believe that Janelle and Darian can move past all of the drama. But even if they can't, he seems to have love for her whether it’s romantic or not. If they aren't together now, then maybe they will find their way back to each other again because Ex on the Beach definitely isn’t going anywhere.