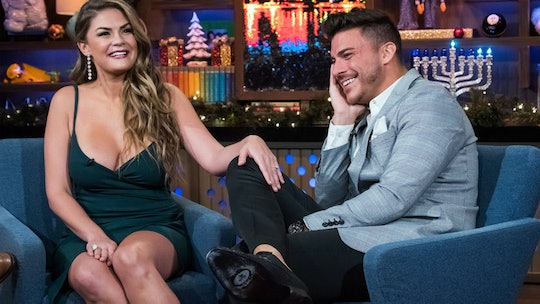 Vanderpump Rules stars Jax Taylor and Brittany Cartwright have been together since 2015, and fans have been along for the ride every step of the way. Now that it's 2019, and the couple has displayed their relationship for all to see, fans are asking if the Pump Rules lovers are ready to take the next step. So are Jax and Brittany married?

When I say that fans have seen everything there is to see in regards to Brittany and Jax's relationship, I mean it. Bravo aired Brittany's big move to Los Angeles in Season 4, the couple's cheating scandal in Season 6, and even gave the couple their own reality show, Jax and Brittany Take Kentucky, in 2017. Now, it's time to raise your glasses because the Pump Rules couple got engaged in the summer of 2018.

On Jun. 7, Brittany shared a photo to celebrate her engagement to Jax. "Omg omg!!!!!!!! We are ENGAGED!" she wrote on her Instagram. "What a way to start our summer and season 7!! I am so happy, so in love, and so beyond excited for this next chapter of our lives! I can’t wait for all of you to see how he proposed! I am the happiest girl ever right now. 💝👑 love can win 💝💝"

Jax also went to the social media site to express his excitement over his engagement to Brittany. On Instagram, he wrote: "She said yes!!! I can’t wait for y’all to see how this happened next season!!! I am marrying the woman of my dreams and I could not be happier!! 💍 make sure y’all tune in season 7 to see how this unfolded."

Now, while Jax and Brittany are not yet married, the couple is currently in the midst of planning their wedding at the Kentucky Castle. When speaking to Entertainment Tonight, Brittany revealed that planning for the wedding has been easier than expected. However, fans can't expect Lisa Vanderpump to officiate the wedding like when Pump Rules co-stars, Katie Maloney and Tom Schwartz, were wed. But at least fans can look forward to a wedding date that's sooner than you think, as the couple has revealed that they have chosen to get married during the summer of 2019.

In an interview on Watch What Happens Live with Andy Cohen, which aired on Jan. 16, Brittany told fans that the entire cast and crew of Vanderpump Rules is invited to attend her wedding to Jax. But the real question is: will fans get to see the wedding, too?

That being said, Brittany also hints that if Vanderpump Rules gets picked up for Season 8, fans will be able to watch their nuptials. And since Brittany is the bride, there's a pretty good chance that the wedding will end up airing on Bravo if the reality series gets another season.

"Well, let's just say that it probably will be," Brittany laughed. "We’re hoping to get picked up again. We don’t know, so that has to happen first.”