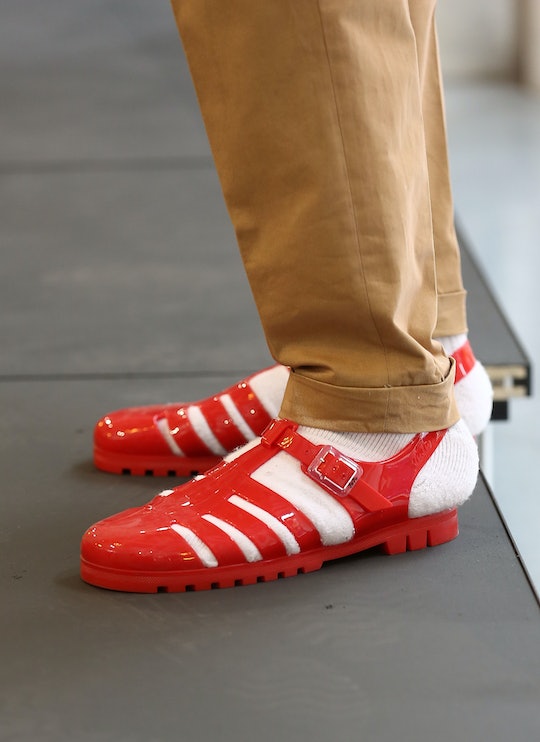 Are Jelly Shoes Safe? A Viral Photo Of A Girl's Bloody Feet Has Parents Terrified

When I was a kid I desperately wanted jelly shoes. They looked so fun — sparkly and mystical bits of jelly adhering to my feet, what's not to love? Plus, all of my friends had jelly shoes and nothing mattered more to me than matching all of my friends, obviously. Unfortunately, my mom thought they were "tacky." She was also worried that they weren't that sturdy. By the time I was old enough to buy my own damn jelly shoes they weren't cool anymore. Now it looks like they're cool again, but are jelly shoes actually safe?

More Like This
Vaccinated People Can Ditch Masks. Where Does That Leave Kids?
Is The Tooth Fairy Real?
Apple Card Family: How It Works & What Your Kids Can Learn
Attorneys General In Nearly Every State Oppose Facebook’s “Instagram For Kids” Plan

A 2-year-old girl was allegedly wearing her jelly shoes for 30 minutes and ended up with some "horrific" bloody feet afterwards. Lisa Connor of Blackpool, England, told the Daily Mail that her daughter Esmé was wearing her new pink jelly shoes for her birthday when her feet started to bleed.

Esmé was in absolute agony. I couldn't believe it because she had only been wearing them for half an hour. It's not like she was running around in them for hours. She was just plodding around the house and then came running in in tears. There was blood all round her ankle and on the soles of her foot. Of course there will be new shoes that rub, but this is ridiculous.

Lisa Connor has asked that the shoes, which were manufactured by Next, be recalled for safety issues. After sharing photos of her daughter's bloodied feet on social media, Lisa told the Daily Mail that other parents have gotten in touch with her to say their children have had similar issues. A spokesperson for Next responded to Connor's claim by saying:

We are terribly sorry for the distress caused and we are taking this matter very seriously. We've asked for this pair of shoes to be returned so we can carry out a detailed inspection of this shoe, since this is the first complaint of this nature that we've received.

Georgie Donaghy, Head of Public Relations for Next shoes provided the same response to Romper.

Jelly shoes are made of PVC plastic and are magically infused with glitter, making them essentially the shoe version of candy to little children. And while they might be bright and shiny and fun, PVC plastic isn't exactly the most breathable fabric known to mankind. Which means that, if your child's feet are sweating, the mixture of sweat and stiff plastic could chafe their feet and cause them to bleed.

There is also the whole slipping issue. Have you ever tried to run in jelly shoes? Yeah, it's basically like having a slip and slide attached to your feet.

There are other issues, too; pebbles and sand getting stuck in your shoes can be painful. The inexpensive (read: cheap) material means definite blisters.

So, essentially, I would say the verdict is that jelly shoes might be fun for short periods of time and special occasions when your kid will be doing a whole lot of sitting pretty. (Which is almost never, right?) Think of jelly shoes as the stiletto heels of children's footwear. Pretty and fun, but not all that practical. Just something nice to have in the closet and look at every once in a while. I guess my mom was right after all.