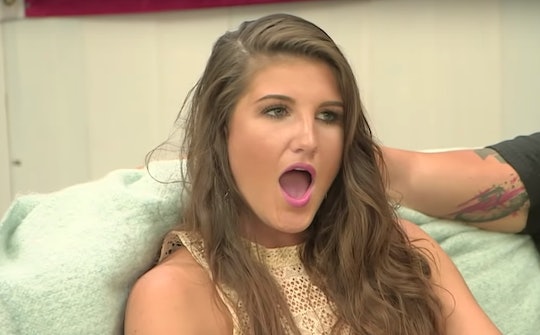 With the way the cast of Floribama Shore catches feelings for each other, I wouldn't be surprised if they all hook up with each other at some point by the time the series is over for good. In all seriousness though, Jeremiah and Kortni seem to be the latest potential pairing. They started off as friends, which bodes well for any relationship, but are Jeremiah and Kortni dating after Floribama Shore? They’re probably better off just staying good buds.

As Jeremiah told Kortni last week when she confessed her growing feelings for him, he didn't want to ruin the friendship they’d built. I’m definitely in the shipping them together camp since they’ve always seemed like a good match. You know, opposites attract and all that. But I guess some friendships are better off where they stand in a strictly platonic way.

Just so you don't hold out hope that the Floribama Shore roommates are together now, after filming for Season 2 has ended, according to Instagram, Kortni seems to be dating someone else. She recently posted a photo in bed with a mystery guy named Ryan Trackwell with the caption, "I choose you." She called him her "Man Crush Monday" in another post. On his Instagram, there’s a Christmas picture of the pair, so I’d say it’s pretty official. Since he hasn't been featured on Floribama Shore yet, the relationship is likely new. But if Kortni can't be with Jeremiah, almost any relationship is probably better than the last one.

Kortni and Jeremiah have been good friends since the show’s beginning. There was a brief time when I thought they might get together, but their friendship has always prevailed. After her boyfriend Logan got into it with the other guys, I thought she and Jeremiah would finally have their time to shine and grow closer because of it. They did, but it was their friendship which grew rather than mutual romantic feelings for each other.

But fans aren't the only ones who have seen sparks between the roommates. Kirk once told cameras on Floribama Shore, "I feel like Jeremiah has this weird crush on Kortni that he doesn't want anyone to know about." Another time, Gus said, "From my perspective looking in, I do see that Jeremiah looks at Kortni a certain way. Really, Jeremiah and Kortni could be a good balance for each other."

It’s hard not to root for them when they did go out during Season 1. However, Jeremiah told Life & Style that it was just to get to know her and nothing more. "It was just the fact that I was trying to get to know the people in the house, and I felt like Kortni, with all the drama that was happening in the house, I wanted to actually learn about who she was outside of the house," he explained.

It might be hard for some Jeremiah and Kortni fans to admit, but it looks like that romantic ship has sailed before it was ever really a legit possibility. If Kortni has moved on from whatever feelings she may have had for Jeremiah, at least they still have one of the tightest friendships in the house right now. And I’d gladly take that over more relationship drama and will they/won't they nonsense. Ahem, Gus and Nilsa.