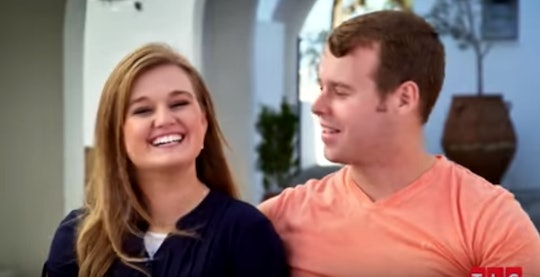 Joe & Kendra Are The Latest Duggars To Reveal Their Baby's Gender

The baby boom for the Duggar family is still going strong, which makes total sense since there are 19 children in the family and so many of them are married and in those good old baby years right now. After that first wave of pregnancy announcements from couples like Josiah and Lauren Duggar, Austin and Joy-Anna Forsyth, and of course, Joe and Kendra Duggar, we're now at stage two of announcements. That's right folks; the good old gender reveals. So if you've been wondering if Joe and Kendra Duggar are having a boy or a girl, today is your lucky day. Because they've found out what their second baby is going to be and the Counting On stars are sharing the news with the world.

The son of Jim Bob and Michelle Duggar married 18-year-old Kendra Caldwell in September 2017 after officially "courting" since March 2017. For those of you who don't know, the Duggar family needs to ask permission to court rather than date, and courting is essentially like dating except there are always a bunch of people around plus side hugs only and you are definitely moving forward with an eye on that altar. Joe and Kendra Duggar welcomed their first child, son Garrett David Duggar, in June 2018, and announced they were expecting a second child in April when Garrett was 10 months old.

When the couple announced they were expecting their second child, Joe Duggar told People that they were a little "shocked" by the second pregnancy but he already had one wish for this baby:

I hope that this little kiddo that we’re going to have is like his mommy, a sweet personality.

Well it turns out Joe Duggar was sort of right and sort of wrong. In some ways the new baby will be like Kendra, but it's not a "him."

We are so excited to announce the gender of baby number #2...It’s a GIRL🎉💝

They also did a bit of a double reveal, explaining when their baby girl was due.

We are so thrilled to welcome our sweet baby girl this November!

Joe and Kendra are clearly excited to be welcoming their first daughter to the family, as they explained to Us Weekly in a statement:

Parenting has already proven to be more wonderful than we could have dreamed. Even though we come from large families, there is nothing like having your own children. We are so thrilled that a little girl will be joining our family! Garrett is going to be such a great big brother.

It seems the Duggar family is experiencing a run on girls these days; Jessa and Ben Seewald welcomed daughter Ivy on May 28, while Josiah and Lauren Duggar also announced on Tuesday that they were expecting a girl.

Should be a fun time for the little cousins in the near future.