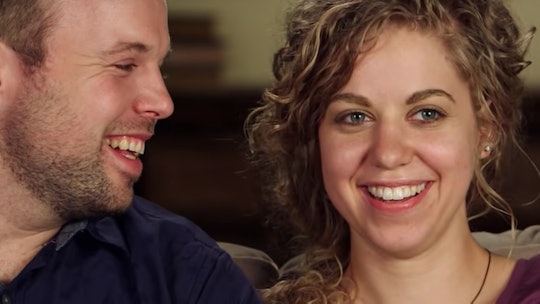 After posting a series of photos from a sex reveal party with their family and friends on Instagram — leaving many Counting On fans to take their guesses —  John-David and Abbie Duggar revealed they're having a girl. The network that airs their reality show, TLC, shared a video on their site of their announcement and confirmed the exciting news to Us Weekly on Tuesday, Aug. 20, shortly after fans kind of cracked the case on Instagram.

"Boy or girl, what’s your guess??" John-David and Abbie captioned three photos of themselves, although one of the photos revealed a telling clue in the background: pink confetti that can be seen on the grass behind them as they shared a sweet smooch. As one follower commented on the post, "lol the pink confetti all over the front lawn in the first pic says it all," while another chimed in, "Girl bc of the confetti." Another pointed out, "Pink confetti in the grass (first pic) congrats!"

Not too long later, in a video shared on TLC on Tuesday, John-David confirmed their guesses "We are so excited to announce that we are having a..." he said, as Abbie chimed in excitedly to say, "Baby girl!"

"We knew the gender of the baby, but our family didn't. Nobody here except for Jana knew," John-David went on to say in the video. Abbie added that the crowd at the sex reveal party was "kind of split half and half" on whether they're having a boy or a girl.

"I'm so excited about hair bows and pink dresses and lots of sparkle," Abbie shared about what she's looking forward to about having a daughter. John-David shared in the same TLC video that he's "really looking forward to having a little baby girl around the house." He continued, "I already have one and now I'm going to have two. I just hope she's as pretty as her mommy, I know she will be."

John-David and Abbie — who tied the knot in November 2018, according to People — announced the exciting news that they're expecting their first child together just a few weeks ago. In an Instagram post shared on Aug. 1 that showed the expectant parents in an airplane holding a cute onesie that had "Baby Passenger On Board" written across the front, the couple wrote they "are on Cloud 9 about welcoming our own little Duggar into the world!!!" The post continued, "It really is amazing to think about being parents and having our own child to raise. We are thankful that God has blessed us with this new life and we look forward to taking on this new adventure!"

Although the couple has not yet revealed when their baby girl is expected to arrive, The Hollywood Gossip reported that their family's bundle of joy could make her debut in early 2020 or late December of this year. Whenever their baby girl does arrive and whatever they decide to name their daughter, she'll undoubtedly be welcomed with lots of love from the entire Duggar family.