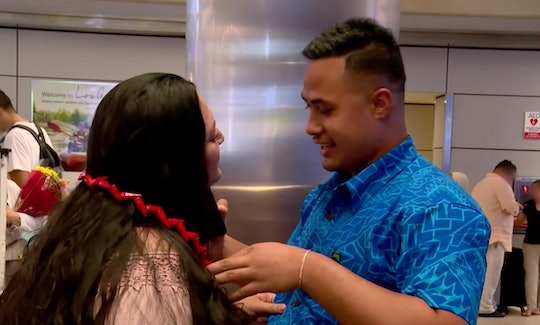 Here's What's Going On With Kalani & Asuelu From '90 Day Fiance'

The stakes for every couple on 90 Day Fiancé are pretty high — but for Kalani and Asuelu, the stakes are even higher, because they share a child together (baby Oliver). At this point in time, every couple from the show would either have to be married or split up, because all of their K-1 visas have expired. So, fans are undoubtedly wondering: Are Kalani and Asuelu married yet?

Unfortunately, there aren't many clues on social media about the current state of Kalani and Asuelu's relationship. Kalani used to regularly update her Instagram, but she recently made it private. Other 90 Day Fiancé couples are very vocal on Instagram about still being with their partner from the show (for example, Leida and Eric). However, it seems like Kalani and Asuelu want to keep that information private, at least until this season of 90 Day Fiancé is over — and I don't blame them.

Kalani, from Orange County, California, met Asuelu when she was on vacation in Samoa, where he is from. She is six years older than her man, and she wound up losing her virginity to him. After returning home to California, she discovered she was pregnant with his child. After giving birth, Asuelu came to America as Kalani's fiancé, on a 90-day K-1 visa.

Things got off to a rocky start when Asuelu landed at LAX in the first episode of 90 Day Fiancé. Upon greeting Kalani, a shirtless Asuelu performed a traditional Samoan dance in the airport, while an embarrassed Kalani looked on. As Kalani's family got to know her 23-year-old fiancé, the couple continued to face roadblocks.

On the show, Kalani explained to the cameras that her dad preferred his daughters to date “white guys,” and that he did not want them marrying men from Samoa. Like Asuelu, Kalani and father are both Samoan, so viewers were unsure what to make of his prejudices against his own culture. "You know how I feel about you being with my kind of people," Kalani's dad told her on 90 Day Fiancé. "It's just the way I was born and raised ... it's a fast life here and it's a slow life there."

Kalani defended her dads words in a recent (but now private) Instagram post. She explained that the show used some creative editing to turn his words into a negative thing, adding that her dad is entitled to his own opinions. "My dad can love his country and his people, and still not want certain cultural norms for his daughters," she wrote in the post. "That’s his prerogative as a father and as a man who grew up in a male-dominated country."

Additionally, Kalani's sister Kolini (yes, that really is her name) has expressed disdain for Asuelu on the show — and Kalani defended her sister's feelings. “My sister WAS Oliver’s dad for his first five months," Kalani wrote of her sister, who has been helping her raise baby Oliver, according to Newsweek. "She watched him when I had to go back to work for Asuelu’s papers, she bought all of the sh*t I didn’t get from my baby shower, and let me skip rent/bills when I had to buy his plane tickets for his interviews and doctor’s appointments." Could this strong defense for Asuelu be a clue that the couple is still together? Only time — and future episodes of 90 Day Fiancé — will tell.