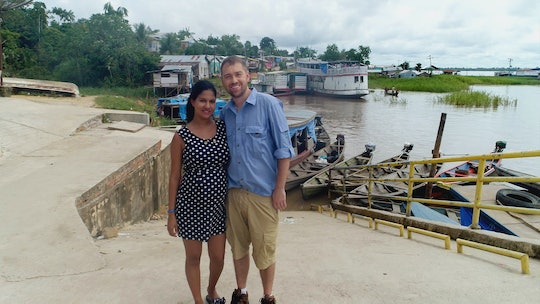 Karine & Paul Have A Lot Going On In '90 Day Fiance: The Other Way'

You might remember Paul and Karine from TLC's 90 Day Fiancé: Before the 90 Days, but now the reality stars are settling down with 90 Day Fiancé: The Other Way, the spin-off series that focuses on six hopeful couples looking to move out of America. While fans have already seen the many ups and downs of this relationship, everyone is wondering if Karine and Paul are still together today. The 90 Day Fiancé: The Other Way couple is now married with a baby, but they still have plenty of obstacles to face on the TLC series.

For anyone who needs a refresher on Paul and Karine's time during Seasons 1 and 2 of 90 Day Fiancé: Before the 90 Days, you should know that after meeting online, Paul ventured to Brazil to meet his girlfriend in real life. While Paul and Karine had difficulties communicating and used a translating app to talk to one another, the pair quickly fell in love and were later married in the show's second season. Thus far in 90 Day Fiancé: The Other Way, Paul learned that he couldn't afford Karine's visa and his mother wasn't willing to become a co-sponsor. So with a baby on the way, Paul and Karine decided to move to Brazil together.

Since 90 Day Fiancé: The Other Way was filmed, Paul and Karine officially moved to Brazil. Then on Mar. 22, the couple welcomed a baby boy named Pierre Martins Staehle. In an interview with E! News, Paul shared his feelings on becoming a new dad.

"I'm very happy, very excited," Paul said. "I'm also very nervous and want to do everything the best that I can and do everything right. Everyone keeps asking how it feels to be a dad. Anyone can make a baby, but going through the day-to-day process of being a father is going to be a new experience. I'm very happy, very honored and very privileged and I want to make sure I do my absolute best for Pierre."

Meanwhile, Karine admitted that while she is happy, the experience has been difficult.

"I am fine, and happy, even with the hard time I have had," Karine said. "And I am recovering well, but I am still very weak. It was super hard, but now everything is fine because the baby is calm and he is breastfeeding well."

That said, it looks like the couple could potentially move back to the United States soon. According to Heavy, Paul announced that Karine received her CR-1 spousal visa on Feb. 21. When the new father revealed the news via his Instagram stories, the TLC reality star also included a bit of important information that suggested that both Karine and their baby, who was born in Manaus, Brazil, will be officially recognized as U.S. citizens.

“A child born abroad to a U.S. citizen parent or parents may acquire U.S. citizenship at birth if certain statutory requirements are met,” Paul shared, per Heavy.

As of now, TLC has made no formal announcement in regards to Karine and Paul's status in Brazil. However, the couple's relationship status seems to be doing just fine and fans will just have to wait and see what happens next.

90 Day Fiance: The Other Way airs Mondays on TLC.