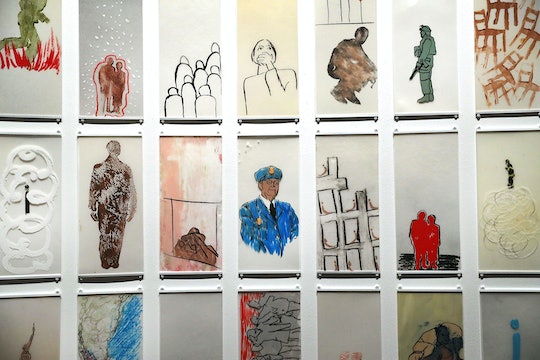 Are Kids Allowed At The 9/11 Memorial? Parents Should Consider All Aspects Of The Memorial

In 2001, two planes hit the twin towers of the World Trade Center in New York City's Financial District followed by two more planes hitting the Pentagon and a field in Pennsylvania. What happened on that day of confusion resulted in sadness but also the uniting of a country. Where the two towers once stood is now a new building, memorial, and a museum. But are kids allowed at the 9/11 memorial — a place that represents so much for so many Americans?

Before the attacks, the World Trade Center was a popular destination, home to office buildings, a restaurant and accommodated nearly 200,000 visitors each day, according to the History Channel. After the attacks, the place where the World Trade Center towers once stood became popular for a completely different reason — for people to pay their respects to those who died on Sept. 11. There are two parts to the 9/11 memorial. There are the two reflecting fountains, which opened in 2011, and feature the names of everyone who died in the 1993 and 2001 terrorist attacks at the World Trade Center. These fountains are located outside in a plaza and are open to the public — giving kids plenty of room to roam while still observing the importance of the fountains and what they symbolize. Kids are allowed to read the names and look at the vast, flowing fountains which seem endless.

Below the plaza, however, is the 9/11 Memorial Museum, which kids are also allowed to visit. But the question on parents minds should also be should kids visit the 9/11 memorial and museum?

That is, of course, up to the parents. There are plenty of factors that go into making that decision. Before deciding if their kids should visit the 9/11 memorial, they should take their age and temperament but also their knowledge of the event and ability to understand what happened. However, I can't say whether or not your children can attend the museum — parents know their own children the best. For those visiting New York City with kids and are still interested in the museum, there are ways to explain 9/11 to children so they have an understanding of the significance of what is going on.

For those interested in visiting the museum, ticket admission prices are a little discounted for kids. Kids ages 6 and under get in for free and tickets for kids ages 7 to 17 are $17. Adult tickets are $24. The 9/11 Memorial website has a guide available to parents to explain each artifact to kids which can be helpful for attending the museum. There are also various parenting blogs on the internet that have reviewed the 9/11 memorial and museum for parents with children — a nice read for parents interested in seeing if their children can handle the museum. According to website Tips for Family Trips, reviewers noted they did not see anything "that was too graphic for ... children at the 9/11 museum."

While kids are definitely allowed at the 9/11 memorial and museum, parents should consider ahead of time whether or not it's appropriate to take their own along with them. Either way, it's a great opportunity to talk to your children about the event in a thoughtful way.