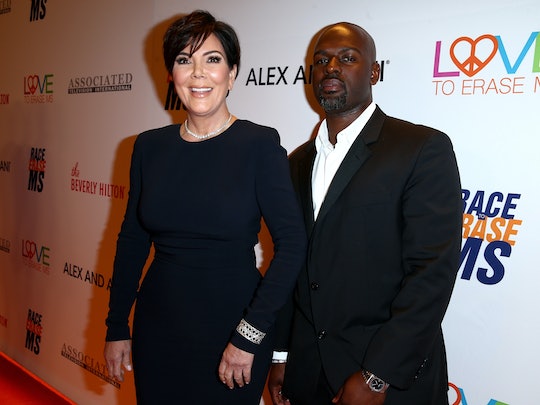 Kris Jenner is definitely the most impressive momager on the planet, probably because I think she invented the term momager so she sort of owns it. But the reality is, she's much more than simply the mother of six kids, five of whom are among the most famous people in the world. The girls, I mean of course, not necessarily Rob. Kris Jenner is also a woman in her own right, who needs a little romance in her life. Enter Corey Gamble, the man she's been dating since 2014. While fans of Keeping Up With The Kardashians wondered if Kris Jenner and Corey Gamble were still together after he was making fewer appearances on the show, it seems they needn't have worried. The happy couple are still hanging in there... and maybe even engaged?

The matriarch of the Kardashian/Jenner clan reportedly met Gamble at a birthday party for designer Riccardo Tisci in 2014, according to Us Weekly. Kris had previously been married to Caitlyn Jenner, with whom she had daughters Kylie and Kendall, and first husband Robert Kardashian Sr. Before Kardashian's death from esophageal cancer in Sep. 2003, the two had four children together, Kourtney, Kim, Robert Jr., and Khloé. By the time Kris and Caitlyn divorced in 2015, the mom had been so busy building her family empire that she hadn't dated in 25 years.

The relationship started at a pretty great time for Jenner, who had just been embroiled in a bit of drama with her ex Caitlyn Jenner. She clearly needed a bit of Kris time and at least one of her daughters was only too happy to see her mom find a little joy... despite being worried about her. As Kim noted on an episode of Keeping Up With The Kardashians:

My mom has been out of the dating game for decades so I want her to have fun again and to meet someone but I just hope that she really thinks things through and doesn't just rush into anything.

Since starting their relationship, of course there has been plenty of gossip about Jenner and Gamble. The amount of discussion over their age difference alone, which always manages to come out as more horrified because Jenner is the older person in the equation, is enough to really get my goat. Plus the couple supposedly broke up for a time in 2017, a rumor that was fueled by an Instagram post Kim Kardashian-West shared of a picture of her mom and the caption "SWF" (single white female).

Kim eventually changed the caption, but everyone got really suspicious that Jenner and Gamble had ended things. Fortunately if the couple were struggling they have definitely made up in the interim. In fact, it looks like the two might even be engaged, if the giant diamond ring on Jenner's wedding ring finger is any indication. When the momager was a guest on The Late, Late Show with James Corden recently, she refused to admit or deny that she and Gamble were engaged.

She played a round of "Spill Your Guts Or Fill Your Guts" with Corden, and laughingly ate a cricket instead of answering Corden's question of whether or not she was engaged to marry Gamble. All while Gamble stood backstage, grinning happily.

So here's my amazing hot take on Kris Jenner and Corey Gamble's relationship; I sort of love it. She's a powerful woman and he is clearly not intimidated or threatened by that in any way, which is so great. Besides, the woman needs a break sometimes from all of her kids' drama... and Corey Gamble appears to fit that bill rather nicely.