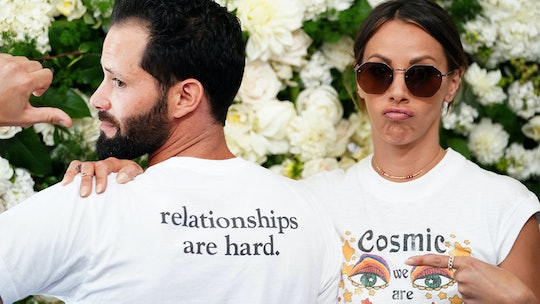 Yikes! Things Are Getting Messy Between Kristen & Carter on 'Vanderpump Rules'

Kristen Doute and Brian Carter seemed to have one of the stronger relationships on Bravo's Vanderpump Rules, but the show's seventh season has revealed more bumps in the road than fans are used to. While a breakup seems like it's on the horizon, fans can't help but wonder if Kristen and Carter are still together on Vanderpump Rules. For better or for worse, it looks like the couple still has more to air out, even after the cameras stopped rolling.

On the Feb. 18 episode of Vanderpump Rules Season 7, viewers saw the revival of "Crazy Kristen" following a wine tasting during a girls' trip to Solvang and a vague text message from Carter. After Kristen trips over a table and stumbles out before viewers get a chance to grasp what had just happened, the girls reveal something that has been alluded to throughout the season: Kristen was acting like this because her relationship with Carter was spiraling. The girls then point out that Carter isn't good for Kristen and that he doesn't contribute anything to their relationship. Yikes.

Now rumors are in full force and everyone is speculating if Kristen and Carter are still dating. While the couple seemingly put the drama past them on social media — Carter even gushed about Kristen for her birthday on the 19th — there still seems to be trouble in paradise. So, what's the truth?

In Nov. 2018, Kristen and Carter went on a picture-perfect trip to Sydney, Australia. During their vacation, Kristen revealed to Daily Mail Australia that her relationship with Carter would be on the rocks for Season 7 of Vanderpump Rules.

"He and I definitely have a little bit of a bumpy season," Kristen told the publication. "This is what I signed up for, and we have to be honest. We're not perfect ... It's really hard to watch things back and I think we're both a little nervous."

Although Kristen admitted that she might not even watch the season after the events that happened while filming the show, the Vanderpump Rules star cleared the air and reassured fans that the situation wasn't that bad. "It's nothing awful, it's not like a big cheating scandal. But obviously we're still together and we got over it," she said.

However, recent events have made fans think otherwise.

Following the Feb. 18 episode of Vanderpump Rules, a brave fan asked Kristen about her current relationship status with Carter and whether or not the couple was fighting on Bravo's Watch What Happens Live with Andy Cohen

"Honestly, I bleed out for the show, like I show every second of everything," Kristen said. "So for this, I'm just going to have to say we're working, we're figuring it out. Especially if you want to talk about what's happening today, with the show airing, and what's been going on in our relationship in the past year or more, we're figuring it out. We'll let you all know when we get to that place."

It seems that the answer to the big question is that it's complicated. Kristen and Carter seemed to have issues in their relationship while they were filming, and they're continuing to figure it out to this day. Until then, all fans can do at this point is watch and see what happens — even if it means waiting for Season 8.