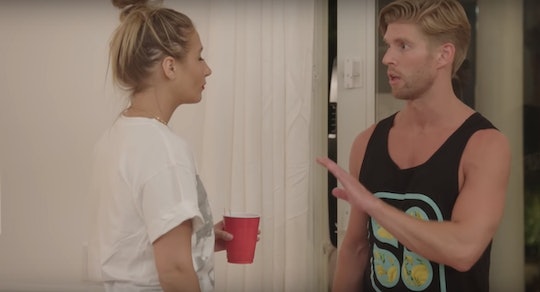 Like any reality TV show where 30-somethings or 20-somethings live in the same house for the summer, the cast of Summer House have had their romantic ups and downs. But through the first and second seasons, Kyle and Amanda managed to build a friendship that blossomed into something very real. Although at the end of Season 2 they still hadn't moved in together, fans were no doubt wondering if Kyle and Amanda are still together after Summer House and it looks like they are stronger than ever.

It probably helped that they had a strong friendship foundation to start them off and that they took their time before really settling down with each other. In September 2018, The Daily Dish reported that the couple got engaged after finding their way back to each other again. Around the same time, Amanda spoke to People about their recent engagement and said that it still felt "surreal" to her.

"Aside from how funny and sexy he is, Kyle’s my best friend. He’s the person I go to for everything. And he forces me to be a better person in different ways by pushing me outside of my comfort zone," she said, of her new fiancé. "Life with him is exciting. And to think he wants to spend the rest our his life with me and I feel the same way, it’s just a real happy feeling."

In the same interview, Kyle said that Amanda is "the most authentic, genuine person I’ve ever met" and that she has everything he looks for in a partner. They definitely had legitimate summer lovin' and, judging by Instagram, they seem to still be happily engaged and looking forward to a future together.

Earlier this month, Kyle posted a photo of himself and Amanda and commended her for being an understanding and patient woman who loves him. He wrote that while he has some learning and evolving to do, "proving it during the summer, on the weekends, in the Hamptons is challenging to say the least." But, he assured fans in the post, "for every crazy fight and drunken night, we have 100x the fun-loving easy-going memories that we’ll never forget."

It's true that Amanda and Kyle haven’t had the easiest relationship on Summer House, but it can't be easy trying to navigate their romance while living with other people and dealing with being filmed the entire time. If they can make it through all of that and still come out on top, though, they must have something special going for them.

Some of Amanda’s Instagram photos show her without her engagement ring on, but a post in March showed her sporting the rock, so it's safe to say that Amanda and Kyle are still together after filming for the most recent season ended. Summer House still hasn't caught up to real life in terms of its timeline, but it looks like Amanda and Kyle have a bright future ahead of them. I honestly wouldn't be surprised if they eventually get a spin-off or at least a Bravo special after their long and drawn out reality TV romance.

Earlier this season, it seemed like Kyle and Amanda were headed for splitsville for good. He admitted to cheating on her and she said that she forgave him, but that he also has no more chances. It could have been the beginning of the end for them. Even so, they came out of it together and appear to still be together. Hopefully there are no more breaks in their future and the Summer House couple can enjoy their engagement for a little while.