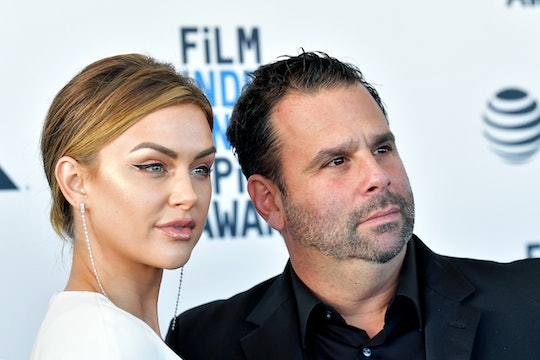 Audiences fell in love with Vanderpump Rules star LaLa Kent and her relationship with film and television producer Randall Emmett — or her "man", as she puts it. But, it looks like there's trouble in paradise and fans are now asking if LaLa and Randall are still together on Vanderpump Rules. In the preview for the episode premiering on Feb. 25, LaLa revealed that the couple decided to take a break from their relationship. "I just feel like Rand and I are not the same," LaLa said as she broke down in the preview. "I decided to take a break from him."

Randall and LaLa first met at the SUR Restaurant in late 2015, where LaLa just so happened to be filming her first season of Vanderpump Rules. Now, Randall and LaLa have been together for almost three years, but as fans might recall, LaLa kept Rand a secret and refrained from saying him name in the show, referring to him as "my man" because he was going through a divorce with Ambyr Childers. Once the divorce was finalized, LaLa and Rand announced their relationship to the public in late 2018 and Rand was introduced to the Pump Rules family in Season 7.

Since Bravo aired the preview, fans have been investigating what caused the rift in the couple's relationship. Throughout the seventh season, there have been hints of turbulence between LaLa and Randall. And while it appears fans will have to watch the Feb. 25 episode to find out why, fans will also be happy to hear that whatever happened has been resolved.

Although fans will see LaLa and Rand take a break while filming Vanderpump Rules, the couple's time apart didn't lead to a break up — and it looks like they're now happier than ever. In Sept. 2018, Lala and Rand got engaged during a romantic trip to Cabo San Lucas, Mexico.

When LaLa took to Instagram to tell the world about her engagement, she wrote:

Last night was the best night of my entire life. I got engaged to the man of my dreams. I get to call this amazing human my fiancé! An engagement last night, my birthday today, and every sign my dad could possibly send me to let me know he’s here. I’m the happiest girl in the world.

Even more recently, the couple celebrated Valentine's Day together. In a sweet Instagram post, LaLa wrote, "You light my soul on fire, pick me up when I fall down, and tie my shoes when I’m trippin. Happy Valentine’s Day to my valentine for life."

Now, LaLa and Rand's relationship will feel like the exact opposite of what fans of Vanderpump Rules will see on their screens on Monday night. During Emily’s List pre-Oscars brunch, LaLa told Us Weekly how she feels about her current relationship with Rand.

“Randall is the most incredible human in the world," LaLa said. "Like, I have to pinch myself that he’s mine because I’m like, ‘What did I do right in my short lifetime to get someone who supports everything I do, even when I may mess up? He’s totally there to pick me up and get me back on my feet."

So if you were looking for some tea on LaLa and Rand, I'm (not) sorry to tell you that there is none. The Vanderpump Rules couple is happy and stronger than ever and if that's not worth rooting for, I don't know what is.