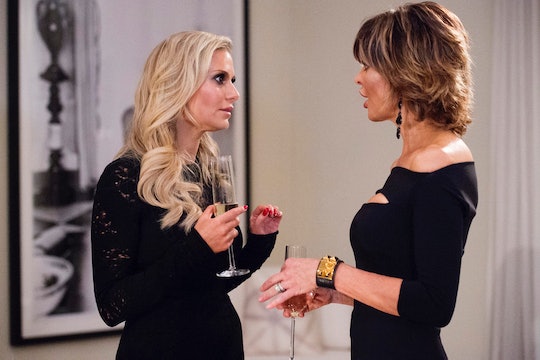 When you get several women with strong personalities together, there’s bound to be some mutual tension that crops up every now and then. Maybe even some table-flipping fights on occasion. That’s probably why there are so many successful versions of The Real Housewives franchise though. But when it comes to The Real Housewives of Beverly Hills, each season is more scandalous than the last it seems. That being said, are Lisa Rinna & Dorit Kemsley friends?

The Real Housewives of Beverly Hills stars never really got along and it seems like there’s always something going on to keep feuds fired up between some of the women. But if it wasn’t enough that during Lisa’s arranged dinner, there were insults, tears, and accusations, Lisa also added to the tension by asking Dorit if she and her friends had been doing cocaine in the bathroom of her house at another dinner party. Talk about awkward — so yeah, there isn't exactly a lot of love lost between them.

Naturally, Dorit said on Watch What Happens Live that she and Lisa, in no uncertain terms, definitely aren’t friends. “No,” she told Andy Cohen. “I wouldn't say that Lisa Rinna and I have a friendship outside of… no.” It’s hard to figure out just when the mutual dislike started, but since panty-gate keeps coming up, I would put money on that being one of the main starting off points in this feud between the two RHOBH stars.

Panty-gate started at the beginning of the season, when Dorit’s husband, PK, was caught stealing a glance up Erika Girardi’s skirt only to discover that she wasn't wearing any panties, which sent Dorit into a frenzy and created this whole big thing that is still being brought up, despite some of the women claiming it’s been put to bed. Dorit was the newest cast member to join RHOBH during Season 7 and clearly the swimsuit designer is having a hard time figuring out where she fits in and who to trust.

During the ladies’ recent trip to Hong Kong, the accusations and rumors between them continued to fly and when Lisa confronted Dorit about her own claims of drug use by the fellow housewife, the terse words came out yet again. "I heard that you maybe took it that I have a problem," Lisa told her. "I want to make sure that you're very clear that that was a joke.” Of course it was a bunch of she said-she said drama that only further drove the very present wedge between the two women further apart.

Clearly, Lisa and Dorit aren’t friends on RHOBH and Dorit made it painfully clear that she probably has no plans to pursue a friendship with the actress and QVC host. I would wish that we could all just get along, but I’d be lying if I said the drama wasn’t what RHOBH is all about.