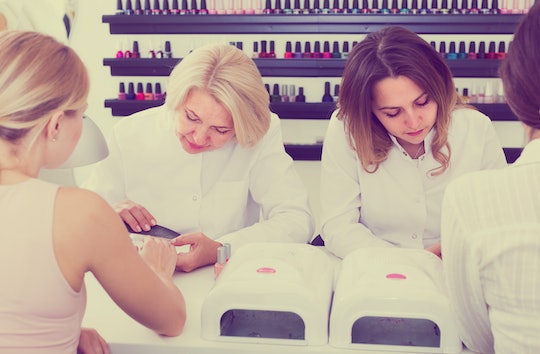 Someone once said, "When my nails look good, I feel like I can conquer the world." That someone was me, and I stand by my statement. Having perfectly filed and polished nails makes me feel like I have my act together, even if the reality is the opposite. Oh, and the hand massages? Heaven. When I was pregnant, the more uncomfortable I became, the more I relied on manicures (and pedicures) to feel good. But with growing concerns about harsh chemicals and their impact on our health, many wonder: Are manicures during pregnancy actually safe?

The answer is... sort of. As reported on the Verywell Family website, while manicures are generally safe during pregnancy, "there are a few details (about safety) that may pertain to you, depending on where you go and who does your nails." The majority of those details, unsurprisingly, have to do with the ingredients in most nail polishes.

Known as "The Big Five," there are five main chemicals commonly found in nail polishes and other products which experts point to as being potentially harmful: dibutyl phthalate, toluene, formaldehyde, formaldehyde resin, and camphor. When you learn what makes them dangerous, you'll see why it's worth finding a salon that doesn't use products with these chemicals:

Dibutyl pchthalate (DBP): DBP (try saying that three times fast) is in the phthalate family of chemicals, according to Chemical Safety Facts. It's traditionally been used in nail polish to minimize chipping, reported a blog post on the Ella + Mila website, which also outlined DBP's potential health risks (including endocrine disruption, impairment of the hormonal development of male fetuses, organ damage, and the potential to instigate early-onset menopause).

Toluene: The Campaign for Safe Cosmetics reported toluene as a toxic chemical "found naturally in crude oil and in the tolu tree... used in nail products to suspend the color and form a smooth finish across the nail." The site added that exposure to this chemical can contribute to "headaches, dizziness and cracked skin, as well as more serious effects such as reproductive damage and respiratory complications."

Formaldehyde: If you're like me, the first thing you think of when you hear the word "formaldehyde" is dissecting a frog in your high school science class. The solution the frog was preserved in: yup, formaldehyde.

So what's it doing in nail salons? As per the Food and Drug Administration (FDA), formaldehyde is used as a hardening agent in polishes and nail hardeners, though using it frequently can actually cause your nails to become brittle and weak. In addition, the FDA noted it "may also cause skin irritation, as well as allergic reactions." But that's not all, as many worry formaldehyde can also lead to cancer, according to Women's Health.

Formaldehyde resin: Different from straight formaldehyde, this resin is described by the website Cosmeticsinfo.org as "a polymer formed from the reaction of toluenesulfonamide and formaldehyde." I literally have no idea what that means, but I do know that it's used to form that shiny film that makes your nails glossier.

There isn't as much research on the safety concerns of this ingredient as some of the others, but as reported by eco-friendly nail polish line Ella + Mila on their site, "preliminary studies show it can cause severe skin irritation and allergic reactions, skin depigmentation and loss of nerve sensation."

Camphor: Camphor is actually naturally-derived from the wood of a camphor tree, as explained by the Environmental Working Group. But synthetic camphor used in nail polish to make it glossy can cause nausea, dizziness, headaches, and disorientation, according to the website Green Matters.

Before you panic, it's important to note that most of these chemicals are considered to be safe if exposure is in small doses. But, the United States is also very far behind when it comes to regulating certain harmful ingredients in the health and beauty industry, and this is no exception. As noted by the Environmental Working Group, there hasn't been a major federal law regulating the chemicals used by cosmetics industry since 1938. That's why you need to take extra precautions when you're pregnant to help ensure the health and wellness of you and your baby as it relates to chemical exposure.

The good news? There are now many safer options for nail products that don't use these chemicals in their formulas. One of those lines comes from tenoverten, a nail salon focused on non-toxic nail care that has locations in New York City, Los Angeles, and Austin. They recently partnered with the maternity fashion line HATCH to launch a collection of pregnancy-safe nail polishes that are free from these chemicals (as well as others they deem questionable or unsafe). The tenoverten x HATCH Trio (pictured below) comes in a variety of color combinations and is available for $36 at tenoverten.com.

Besides seeking out non-toxic nail polishes, there are other measures you can take to make sure your manicure is safe. Have you ever walked into a nail salon and been overwhelmed by the chemical smell? If so, this is most definitely not place to go for a manicure when you're pregnant (or really anytime). The reason it smells so strongly is because of poor ventilation. And that, according to experts, can greatly impact how much of those potentially harmful ingredients you (and your baby) are being exposed to. A 2016 report by the New York Department of Health revealed the importance of proper ventilation in nail salons, especially for the salon workers.

"Try to find a salon that has increased ventilation and seems to have good airflow in the space," Nadine Abramcyk, one of the founders of tenoverten, advises.

"Try to sit near a fresh air source such as a window or open door if possible during the service and don't stay and linger post service."

Another potential risk at nail salons is one that might not be on your radar at all: The UV dryers. Sure, it's frustrating when you leave the salon thinking your nails are dry and then, boom, one wrong move to get your keys from your purse and your perfect nails are ruined. But you know what's worse than that? Potentially harming your health. Though the FDA reports the risk is low when it comes to normal UV exposure under these machines, why take the risk at all when (as the FDA also reports) exposure to ultraviolet radiation can "cause damage to your skin, especially if you’re exposed over time... and lead to premature wrinkles, age spots, and even skin cancer."

I know, you love your gel manicure. But like many "good" things, it may be time for this one to come to an end.

So yes, manicures are a fabulous way to relax and pamper yourself during pregnancy and mama, you deserve all the relaxation money can buy right now. However, be mindful of where you go, what products they're using (not just on you, but in the salon as a whole), and how long you're staying in the salon itself. Your health, and your baby, will thank you.

More Like This
Pelvic Pain During Pregnancy: What Causes It & How To Deal With It
What Is Acid Reflux Tape? Chrissy Teigen Swears By It
My Queer Pregnancy Began In A Cold Doctor’s Office, But It Was Also Weirdly Romantic
40 Lovely, Lively, Lavish Girls Names That Begin With “L”