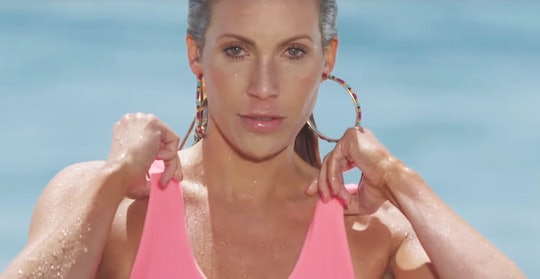 Okay, I'm Confused About Marie & Devin On 'Ex On The Beach' — Are They Together?

It's always a treat to see who washes up on the shores of MTV's Ex on the Beach. However, Devin Walker from Are You the One? fame wasn't the only one left surprised when Marie Roda of The Real World: St. Thomas arrived on the reality series. Fans were shocked to hear the pair of exes met during Season 31 of The Challenge and were on and off for two years. Nevertheless, they've been facing their fair share of obstacles in the new series, and fans are wondering if Marie and Devin are still together after Ex on the Beach. Not going to lie, the timeline of this relationship is a little confusing.

As of now, it's difficult to predict if Devin and Marie are dating. The MTV series is only a few weeks in, and there's plenty of drama on the horizon. That being said, after digging on social media, I found almost nothing. Marie's Instagram account is filled with glorious memes and fun photos. Meanwhile, Devin's Instagram feed is jam-packed with pictures of himself. But neither party seems interested in posting pics of each other. There also doesn't seem to be any interaction between Devin and Marie on Twitter. So it looks like fans will just have to wait and see what happens next.

When Season 3 of Ex on the Beach premiered on MTV, viewers were confused when they saw Marie and Devin paired up as exes. The Challenge never really showcased the relationship, and some fans even speculated the couple was fake for TV. The situation was worsened when Marie commented on a fan's perplexed post about Marie and Devin's relationship.

"We didn’t say we’ve ever dated," Marie wrote. "In fact, he said I’ve been trying to date him. Ex is just the term associated for ppl who come in."

But the rumors were put to rest when MTV's Real World: Go Big or Go Home alum, Kailah Casillas vouched for the couple.

"For any of you who think this Devin Marie thing is just for tv, I have personally seen this unfold and it’s not fake at all lol (also any of you who saw them together at the Challenge event in Illinois 👀)," she wrote.

Regardless, Marie has made it clear she's all in when it comes to Devin. In her Ex on the Beach debut, Marie expressed her intentions to get Devin back — whether he knows it or not.

"Devin may think he’s the one that got away, but he’s not getting away. I’m coming to Ex on the Beach to claim my man," she said. "I love him, he loves me, and it’s time to clear this up for everybody. Everyone thinks it’s unrequited love, but you can’t spell unrequited without quit, and I never give up on love."

Now that Ex on the Beach is a few weeks in, fans have had a chance to see Marie and Devin's relationship grow. Marie will also speak with Shannon Duffy and spill all her thoughts on Devin, according to a preview from the Aug. 15 episode.

"It's like the yin and the yang," Marie explained to Shannon in the clip. "He's smart, he's witty. I get him — I laugh at his jokes. [And] he gets me. I feel like me and Devin have been making a little bit of progress."

Shannon then opened up about Marie and Devin in a confessional. "It's not complex," Shannon said. "It's literally just... 'I like beer, guac, and yoga. Let's hang out. Let's chill.' They're just best friends, which is the kind of relationship you would want with your significant other."

Even so, Marie plans on breaking down Devin's walls. "Persistence breaks down resistance," she said. "Never forget that."