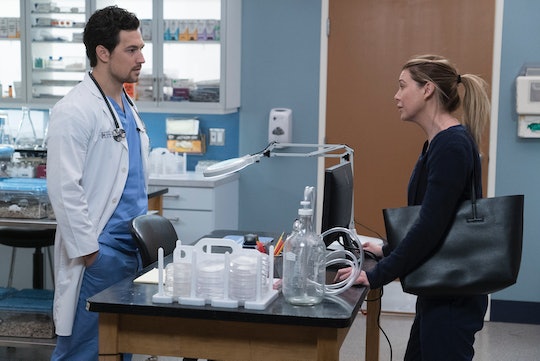 Grey’s Anatomy has been home to many love triangles in my time and when Meredith, Link, and DeLuca began theirs, it wasn't a first for her. Only this time, it seemed to be a little easier for her to choose between the men and now it looks like she and DeLuca are a thing. He basically worships her, but I’m not sure if that means Meredith and DeLuca are official on Grey’s Anatomy. They have a lot of potential as a couple, especially since it couldn't be more obvious that he reminds her of Derek. But I don’t know if that means she is totally over Link and the possibility of hooking up with him at some point. A player’s gonna play, am I right?

It does *seem* like Meredith and DeLuca are official. Like she has said herself, she’s a grown woman with three kids. She doesn't have time to ping pong back and forth between men and although that love triangle was very Grey’s and appropriate for Meredith specifically, this might be it for her. Last week, Meredith and DeLuca had their first official kiss, which was, in a word, epic. She then agreed to go on a date with him and she ditched Link for the guy. She has made her decision and it could mean that they will soon be official, if they aren't already.

Giacomo Giannotti, who plays DeLuca, recently told Parade that Meredith’s values could be an indicator of who she would rather be with between Link and DeLuca. "She’s also in a place, I think, for the first time since Derek, where she’s really genuinely wanting to be open to the possibility of a real love," he said. "Not a romance, not a hook-up, something real."

I love Link as much as the next ortho fangirl, but he seems more like a hookup and a fun time than the next Derek of Meredith’s life. Giannotti added that he would like to see real love for his own character too, and that could have been a way of accidentally spilling the beans that if Meredith and DeLuca are after the same things, they are probably going to be together for the long haul.

When Meredith stood up Link for their Valentine’s Day date last week and instead joined DeLuca on the Grey Sloan Memorial Hospital roof for a V-Day smooch, she made her decision. If they aren't official just yet, then they likely will be soon. Unfortunately, that leaves Link out in the cold, but I’m sure he can manage to find someone else in the pool of eligible doctors on the hospital staff.

The little comparisons of DeLuca to Derek and his history with Meredith and at the hospital in general all seemed to lead up to her decision in choosing what looks like a more lasting and deep love than something with Link. Meredith was once the younger intern looking for approval and romance from Derek and now, with DeLuca and Meredith, the roles are reversed. He’s no longer an intern, but he is lower on the rungs. He’s also had elevator *moments* with her and back in the day, at the start of their relationship, those were the most important conversations Meredith had with Derek.

As nice as Link is, I don't see him investing any more time in the live triangle after Meredith disregarded their date and he probably shouldn't anyway. Meredith probably hasn't changed her Facebook relationship status to "in a relationship," but it’s probably more like "it's complicated." And for now, that will have to do.