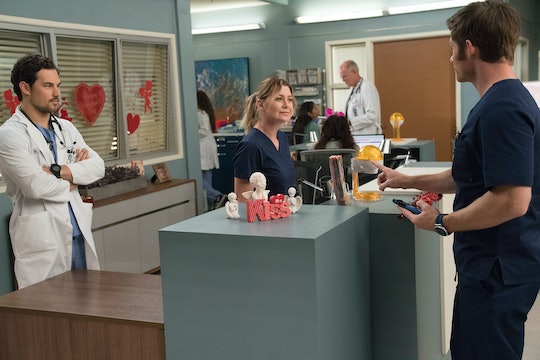 Meredith Still Has To Choose Between Link & DeLuca On 'Grey's Anatomy'

After several seasons of getting over Derek, falling for another doctor, and trying out the dating pool, Meredith has finally found a connection on Grey’s Anatomy. Make that two connections, because it can never be as simple as two people falling in love. Now Meredith has to choose Link or DeLuca on Grey’s Anatomy and the love triangle has fans torn. Honestly, both men have their strengths and could each be a good match for Meredith, but I feel like whoever she chooses is going to have to be in it for the long haul, because I don't see Meredith with more than two great loves before the series ends.

On the one hand, Meredith seems to have a solid connection with Link, who is new, exciting, and made a serious impression on her kids. They called him Thor. I would say he’s in if she wants him to be. He’s also a lot more than a handsome face, according to Jo, who is besties with him from way back. Since Meredith’s bestie is Alex, Jo’s husband, they would make an easy foursome, so that’s another point for Link.

When it comes to DeLuca, though, there is more history. He and Meredith already have a strong working relationship and, dare I say, friendship. He could definitely be endgame if she would give him the time of day, but I think Meredith is as confused about her feelings as Grey’s Anatomy fans are right now.

Some fans are comparing Link to Derek, which could mean that Meredith chooses him in the end. I love the chemistry between Meredith and DeLuca, but I do see how Link can be compared to Derek with his confidence and personality.

Other fans just prefer Link over DeLuca. As some fans have pointed out on Twitter, DeLuca did date Maggie in the past. Granted, that seems like several lifetimes ago now, but it’s still a weird dynamic to bring to the table if Meredith and DeLuca end up together.

Then, you have the DeLuca and Meredith shippers. They’re not here for Link’s charm or his "ortho god" jokes. They want Meredith to be with DeLuca because they see more chemistry with these two and are just not feeling Link. I don't think it's even anything personal against poor Link. He just got the bum end of the stick as a Grey’s Anatomy newbie.

Fans who are all about DeLuca and Meredith can't seem to see anyone else for Meredith besides him. Personally, I can't choose between the two guys right now, so I’m just riding this one out until the show makes the decision for me.

Right now, things could go either way. The last time Meredith saw Link was when he helped her throw a last minute birthday party for her kid, where he stayed for drinks after. Then, Meredith got a text from DeLuca, asking her to go out with him to celebrate his latest successful surgery. We’ll have to see how that missed text plays out the next time she sees DeLuca, but it’s clear that the Grey’s Anatomy powers that be are setting this up for a love triangle where you feel sorry for whoever isn't picked.

I think it’s also fair to say that because the show is building up both of these characters so much, some fans don't know who to root for at this point. It would make things a lot easier if Link or DeLuca turned out to be a jerk or had a secret wife somewhere.

Until Meredith finds something wrong with Link or until DeLuca’s girlfriend Sam, who they sent to Switzerland, comes back, viewers are going to be watching the guys earn points with Meredith like it’s a tennis match.