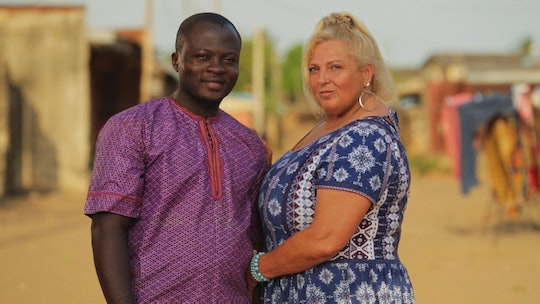 Angela May Have Spoiled The End Of '90 Day Fiance'

Despite their various fights throughout this season of 90 Day Fiancé: Before the 90 Days, Michael and Angela eventually proposed to each other. So, Are Michael and Angela married now? The two shared a moment that, I have to say, was one of the sweetest of the season.

Their relationship, however, may have soured between then and now. There's no evidence online that the two are now married, and there are some hints that they have actually broken up. In September, Angela was arrested for DUI and apparently, she said in her booking report that she is single. The arrest happened months after Before the 90 Days was filmed, so perhaps after their joint-proposal, Angela and Michael decided to go their separate ways.

Michael does make appearances on Angela's Facebook page, however. Her latest post, from October 1, actually has to do with Michael. Angela shared a screenshot supposedly from Michael's phone of another woman trying to get in contact with him. "I just want to tell you that you are such a good man," part of the message said. "I am very attracted to you. If for some reason you might [sic] Angela do not get married I would love to marry you and help you get your green card." This women went on (and on and on), but the point is that she slid into Michael's DMs and he told Angela about it.

Angela posted said screenshot for the world to see with the caption, "Wow Xmas cards this early..santa coming.....ho ho hi [sic] Lmao." My first thought when seeing this is that she and Michael must still be together, because why else would he forward her this message? Then again, they could be broken up but on good terms, thus able to joke with each other about it. While Michael didn't comment on that thread, he's no stranger to Angela's Facebook. For one, it's how they met, and furthermore, Michael still comments on her photos. This happened fairly recently in September when Angela changed her profile photo. Michael commented with a sticker of a dog farting out a heart. Romantic, no?

From these cryptic Facebook posts to Angela saying she was single after a DUI, their relationship seems up in the air — or rather, the two are keeping it a secret until the finale. I think the push and pull of their status makes sense considering that's how their relationship has gone on the show. In the past few episodes, Angela and Michael were at odds with each other due to the fact that Michael cheated on Angela long before she made the trip to Nigeria.

Michael said Angela was "absolutely right" in how it went down, and Angela said he made her look like a "f*cking fool." On the following episode of 90 Day Fiancé, "The Things We Do For Love," however, the two seemed to reconcile. After asking her daughter for advice, Angela popped the question with an American flag she stuffed in her bra (Honestly? Goals). Michael was beside himself with joy, and proceeded to propose as well (with a ring, not a Nigerian flag). While they seemed overjoyed in the moment, if Angela was telling the truth when she was arrested, they may be currently single. Viewers can watch the next episode of 90 Day Fiancé: Before the 90 Days to know if Michael will actually make it to America like Angela promised.