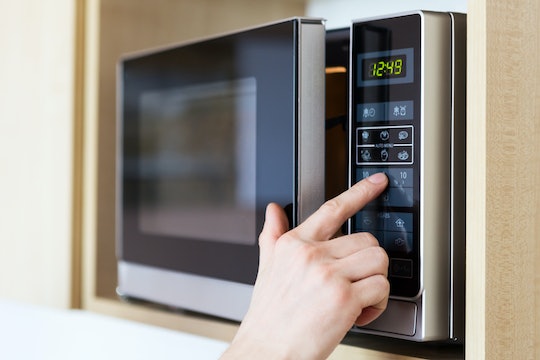 Are Microwaves Safe To Use During Pregnancy?

There are few things I love more than leftovers. I mean, lasagna tastes so much better on day two, right? When I was pregnant, I didn't think twice about nuking my food the next day, and I certainly didn't stop to think, "are microwaves safe to use during pregnancy?" Maybe it's possible that a method of cooking colloquially referred to as "nuking," might not be the safest thing for a pregnant woman to hang with.

The crazy thing is that when I was pregnant, I was told to microwave my deli meat until it was 165 degrees Fahrenheit. Now I'm wondering if that's a bit of "live by the sword, die by the sword" type of advice. Like, maybe I should've been frying up my pastrami in my cast iron skillet instead of zapping it in my microwave. A 2011 Kaiser Permanente study conducted over a period of 13 years showed that women who had the most exposure to microwave radiation during their pregnancy had children who developed asthma at a significantly higher rate than those who did not. Most of these children developed asthma before their fifth birthday, which is, at that age, difficult to diagnose accurately, and also difficult to treat, according to the Mayo Clinic. So are microwaves safe to use during pregnancy if this study shows a correlation?

That's the tough part — it's not a perfect study. Yes, there seems to be a correlation between microwave exposure during pregnancy and asthma in children. But, even the study noted that children who develop asthma often share in similar environmental and other sociodemographic factors, such as the known link between proximity to power lines and asthma that the very same scientists studied a decade before publishing this one. Researchers also noted that this information is strictly correlational and not causational. In the study, it simply established another correlational possibility for the development of asthma, because as noted, the causes of asthma are largely unknown.

Microwaves are in everything from cell phones to wi-fi to blow dryers. The moral of this story is that maybe you shouldn't hang out directly beside your microwave as you cook, and maybe you let your hair dry naturally for a few days a week. Heck, wash it less — it's as good an excuse as any I've seen or used. This study on microwave use during pregnancy isn't designed to freak you out. Like most studies, researchers are just observing data to see where they can use the input against and with other studies to hopefully draw a clearer map as to what is really going on.

If you're concerned that your craving for Hot Pockets is going to be an issue, talk to your OB-GYN for peace of mind. You're most likely fine, but it never hurts to get a second opinion if you're nervous. And then pick up another box of the pepperoni Hot Pockets — I know this made you want one.