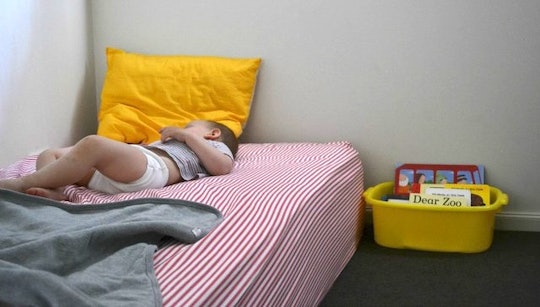 The crib. The most basic baby item, the center of every nursery pinned on Pinterest. Matching crib-dresser-and-changer sets sell for thousands of dollars; used sets are battled for in the Facebook Marketplace. Purchasing a crib seems like a foregone conclusion for any new parent, yet some families are forgoing them altogether. They place their newborn or infant on a floor-bed, in a child-safe room with everything accessible at their level.

While this practice might give some new parents heart palpitations, imagining a small, roly-poly infant migrating around their room, it's actually a common practice in the Montessori method of child-rearing and education. The Italian doctor, teacher, and innovator Maria Montessori developed her parenting techniques based on the ways that children naturally learn about their world and opened the world’s first Montessori school in Rome in 1907. But the "child-centered" approach begins before school, and her techniques are now applied to all levels of parenting.

Supporters of the method purport that children should be able to reach absolutely everything they would need — from snacks and drinks to clothes and toys — and if they want to get in and out of their bed, they should be able to. This is why a crib is not generally used by Montessori-influenced parents. Even the artwork should be at their eye level, as opposed to hung at a height enjoyable for adults.

Sounds idyllic... but how does this actually work in reality? When the topic is brought up amongst a group of multigenerational moms, many eyebrows are raised. Images of children clambering around their rooms at midnight come to mind. But among millennial moms, more and more are choosing to forgo the crib in favor of bed-sharing/family bed, or a Montessori-inspired nursery.

Jacqueline R., the pregnant mother of a 2-year-old, decided to bypass the crib when her son was 4 months old. “Everyone had an opinion about us putting him on a floor bed… but we thought if that’s all he knew, he’d adjust to the freedom," she tells me. "And he did.”

They anchored all the furniture to the walls and made the space completely safe, a “yes” space, and Evander thrived being able to control his boundaries.

Jacqueline’s reasoning for making a Montessori-style room at four months had to do with her child’s personality. He did not like to be swaddled, and preferred to nap in the middle of his parents’ bed with supervision. When he was becoming more mobile and they transitioned him to the crib, her son's anxiety peaked. The crib had a solid headboard and footboard, and they felt that the enclosed space might be making him upset. So, they transitioned to a floor bed.

He started getting off of his floor bed around 16 months. He would sometimes fall asleep by the door to his room, so his parents placed a soft mat there as well. They anchored all the furniture to the walls and made the space completely safe, a “yes” space, and he thrived being able to control his boundaries. Now they plan to use the same floor bed for their new daughter, after she spends the first few months in a mini crib in an alcove in their bedroom.

How We Montessori blogger Kylie D'Alton explains on her site that her son Otis began to walk around once he got mobile, so she moved him into his brother's room on a floor bed. "Now they share a room and bedtime is much easier and simpler," she has written.

On a slightly different journey, but with the same destination, are Samantha and Brett Booth. They are parents of three, and have always followed attachment parenting with their kids: extended breastfeeding, natural parenting, and respecting their kids as little autonomous people. They want to encourage independence in them while fostering attachment to mom and dad.

Their oldest son went to a Montessori preschool, and they really liked the philosophy. When their youngest child, Nathaniel, was born, he struggled with sleep regulation. He is a passionate, fun, loving, and intense child. Through a series of musical beds — cosleeper, a crib, in his parents’ bed, a sidecar crib — they finally ran with a crib mattress in his room, on the floor. They started at 10 months old, and began with naps. “This is the safest thing," Samantha explains to me, "if he rolls off, he won’t get hurt. If he crawls off, he has control, the room is safe for him.”

The crib was a huge battleground, it wasn’t working at all. This has been much more comforting for him.

He wouldn't get off the bed alone though — he sat up and asked for them. So they began using it overnight as well, several months later. Samantha sleeps in the room with him because it is what he requires, for now. They have tried to have him sleep alone, but he had anxiety. She says she knows that when he is ready, they will be able to transition him to sleeping alone.

“People are worried kids will get up and play, but they don’t. He understands that his bed is for sleep. When he wakes up, he requires a little bit of patting to fall back asleep. The crib was a huge battleground, it wasn’t working at all. This has been much more comforting for him.”

Finally, after months of trying to figure out what their son was trying to tell them, the Booths have found a solution that works for their family.

While a Montessori-style floor bed is not for every family, and few new parents are going to remove the crib from their registry after learning about this parenting style, it does have some inherent value. With this method, children are empowered. They explore their autonomy at a young age, which creates confident adults. Giving children the choice of where to sleep, Montessori parents feel, is respectful.

Maria Montessori believed not in telling children what they have to do, but in giving them choices. A crib or confined bed is telling a child that they have to sleep, while a child-safe and child-oriented room with an accessible bed lets them know that they have the choice to sleep if they are tired.

No two sets of parents will ever agree on parenting style, but the success stories from these Montessori-leaning parents might help another family struggling with sleep to realize that there are more options than the conventional methods of infant sleep.

More Like This
These 4 Sleeping Positions Will Keep You Comfortable After A C-Section
Should You Be Giving Your Toddler Melatonin To Help Them Sleep?
Here's When Your Baby Might Start Sleeping Through The Night For Real
Baby Not Napping At Day Care? These Reasons May Be Why